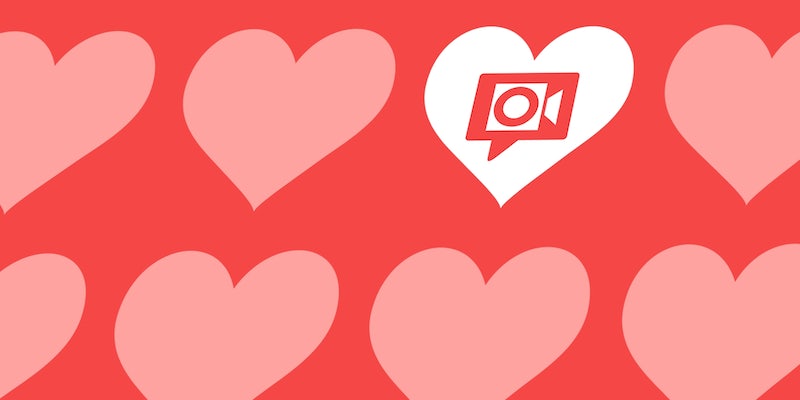 Is this video app the future of dating?

Honesty is important to a relationship, and it's certainly harder to hide in a video... so could this app be the best way to find romance online?

“Hello, I’m Fred,” the red-headed man says to the camera. “Here’s some of my artwork.” Fred swivels around, revealing a framed photograph of Bob Dylan and what looks to be a poster from the 1972 musical Godspell on the walls. The video ends.

This clip is one of the profiles on Instamour, a new video dating startup. It is exactly eight seconds long. From the clip, thumbnail photo, and scant personal info on Fred’s profile, all I know about him is that he is 35, heterosexual, drinks Corona, and may or may not be a fan of musical theater composer Stephen Schwartz.

But Instamour creator Jason Sherman is betting those eight seconds are enough for me to determine whether I’m romantically interested in Fred, or at least interested enough to click on the “heart” icon next to his video (for the record, I do. Although I’m in a long-term relationship, that doesn’t preclude me from appreciating someone with two of my favorite qualities: a love for musical theater, and eumelanin deficiency).

“People are tired of going on dating sites and filling out a bunch of text, or uploading a bunch of pictures,” he says. “They want to show off their personalities, and the best way to do that is with video.”

Available on iOS (an Android version came out last Friday), Instamour can best be described as the love child of Tinder and Flik: it’s a dating app that lets you browse through users’ video profiles, which consist of four, eight-second clips, which can fall under a variety of categories, from “goofy” to “pet/funny” to “favorite place.” It also offers in-app direct messaging and video chat features (there’s no email, so there’s no chance of your inbox getting inundated with messages from suitors, as is the case on OKCupid).

While the concept of video dating may seem somewhat archaic, or like a plot device from a 1980s bachelor sitcom, Instamour combines the immediacy of in-app chatting with the intimacy and naturalism of a video platform, which Sherman says gives you a more accurate sense of a person’s appearance and personality than a profile photo.

“[With regular dating apps], guys are posting fake pictures and girls are posting headshots. On a video, you can’t get away with that stuff,” he says. “You’re showing your personality, your surroundings, your body; you wanna show you have all your teeth, all your hair, whatever it is. You can’t fake anything. You can Photoshop a picture, but you can’t Photoshop a video.”

Instamour also features a one-to-one video chat feature, for users who “heart” each other’s profiles. In this respect, it’s somewhat similar to Tinder, which also offers in-app instant chatting. But Sherman blanches at further comparisons between the two apps, referring to the latter as “very basic.”

“It’s a superficial app, like Hot-Or-Not from the ’90s. All you’re getting is a picture and some basic info,” he says. “The people on Tinder, they’re not looking for relationships, they’re looking for hookups. Instamour is a much more fleshed-out dating app. It’’s less of a gimmick, and more of a platform.”

Sherman understands Tinder’s weaknesses first hand, and same goes for other dating sites: he regularly uses them, and has for more than 15 years. A Web developer from Philadelphia, he came up with the concept for Instamour way back in 2004, just before the advent of smartphones: “I was using a lot of dating sites back then, and I thought the emailing back and forth was annoying and the profile pictures just weren’t realistic,” he says. “I thought, ‘why not use webcams to have Web dates?’”

Although he held off on launching Instamour, citing a lack of sophisticated webcam technology, the success of video-based platforms like Vine and Instagram Video convinced him the time was right to launch the app last year.

He chose the name Instamour— a portmanteau of “instant” and “amour,” the French word for love—because he thought “instant love is kinda what the app gives you, because you instantly see and talk to someone and instantly get to see their personality” (he also admits the name sought to capitalize on the enormous success of Instagram: “I thought, ‘yeah, Instagram’s popular, so why not kinda use that popularity to fuel my name as well?’ Which people are telling me was a smart move.”).

After launching on iOS four months ago, Instamour has been gradually gaining ground: according to analytics from last month, the app currently has a bit more than 1,200 active users, with unique screen views logging in at more than 10,000 per month. That’s not bad for a dating app startup (and Sherman predicts the figures will double with the launch of Android), but it certainly pales in comparison to established dating apps like Tinder, which averages about 2 million daily users.

Part of the reason why users have been slow to adopt apps like Instamour (or similar video dating apps like Date.fm, At First Sight, and Charm), could be in part due to a general sense of resistance to the concept of video dating, which is certainly more intimate and formal than your standard late-night emoji exchange on OKC or Tinder. In a NY Mag post on Charm, writer Erica Schwiegerhausen referred to the app as “mortifying,” writing, “it’s hard to think of anything less casual than creating a self-promotional video clip designed to show off your most dateable attributes.”

Given the prevalence of email requests for tit pics and cam sessions from barely literate weirdos on OKC, the prospect of vid-chatting with a prospective suitor also seems like it would be rife with potential for creepy or pervtastic interaction. The creepiness factor does, admittedly, sneak into some of the Instamour dating profiles: even Fred’s profile, while innocuous in terms of content, has the shaky, hand-held, eerily intimate quality of an eighth-grader’s webcam stream from his basement, or an amateur ASMR video (as, admittedly, does mine, which begins with the charming intro: “I am EJ, I’m, uh, a human. Yeah”).

Sherman says that Instamour moderators regularly monitor the videos on the site for inappropriate content, and if someone exhibits offensive or inappropriate behavior, it’s easy to flag the person and remove them from your contacts list, thus ensuring they won’t contact you again (if the offender receives three flags, they’re instantly banned from the app). But in a one-on-one video chat context, it seems there’s little a moderator can do to prevent someone from whipping out their dick and going to town, which is reason in itself for me to be wary of an app that provides a platform for such interactions.

In my skepticism toward the video dating platform, however, Sherman says I’m in the minority: people are more excited than ever to showcase themselves on video, and there’s nothing that proves that more than the enormous success of platforms like Vine, YouTube, and Instagram Video. “I truly believe 2014 is the year of the video,” he says. “There are millions of people posting on Vine on a daily basis, on YouTube, Glide, Snapchat, you name it. Those are the people I’m targeting. Those are the people who will use this platform.”

And to those who may not feel comfortable showing themselves on camera for Instamour, Sherman has this to say: “They’re probably hiding something. That’s what I think.”