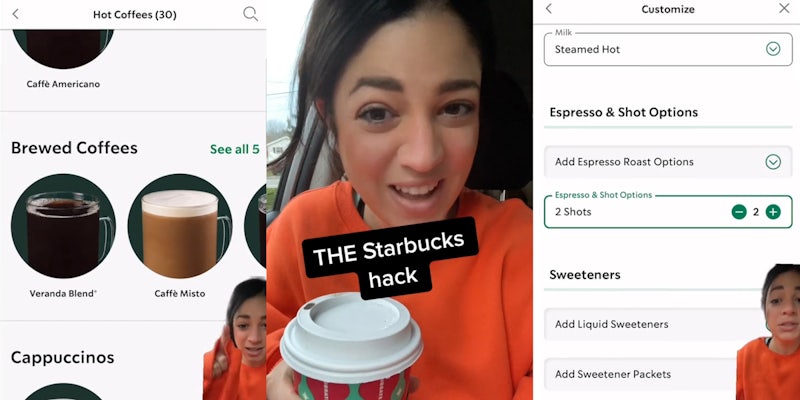 ‘This is the only drink I use my stars on’: Starbucks customer shares hack on how to get a ‘free’ drink when using mobile app

A woman claims even the Starbucks barista was impressed with her latest Starbucks hack. TikTok users have been obsessing over her recommendation as the original video has climbed to over 6 million views as of Sunday.

User Lyell (@lyellgirl) lays out her secret while walking viewers through the various steps on the mobile ordering app. She shows how she selects “Hot Coffees” and then adds “Cafe Misto” to her order, a drink with steamed milk.

She then selects her milk of choice, whatever syrup she’s in the mood for, and adds 2 shots of espresso.

At this point, the drink with all the custom additions is almost $8. However, as she’s checking out, Lyell selects to use her ’50 stars,’ Starbucks’ version of reward points, and ends up getting her drink for free.

She says the hack works because the drink still counts as a “Hot Coffee,” which costs 50 stars, instead of a more expensive drink. A latte, which is essentially what she made with the additions, costs 150 stars.

In the past, some Starbucks employees have rallied against “hacks.” Some claim that it causes disruptions in workflows, makes managers angry, and creates rude customers.

But many users in the comments, including some claiming to be Starbucks employees, praised Lyell’s money-saving strategy.

“As a starbucks barista this is BEAUTIFUL so very smart keep it up,” wrote @333neyy.

“As a broke nursing student who has 6:30 am clinicals this hack has been my life saver this winter,” commented @brds333.

The Daily Dot reached out to @lyellgirl via Instagram message.