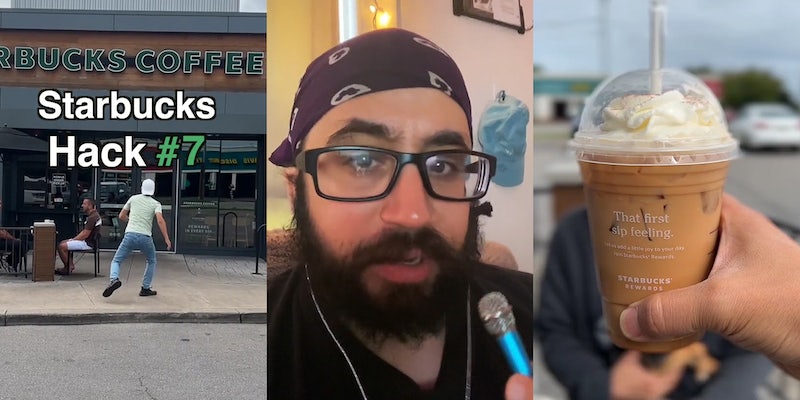 A Starbucks employee on TikTok is begging customers to stop ordering hacks. While these orders might save the customer a few bucks, he says they cause chaos for the baristas.

The barista stitched another video from user @hellthyjunkfood, detailing how to get a $6 Pumpkin Spice Latte for around $2.50 by ordering espresso shots with modifications.

@the_hip_barista_ says those customers aren’t fooling anyone. While the ‘hack’ version calls for a splash of milk, the Starbucks worker claims customers still expect baristas to fill their cups with milk.

“When we see stickers like this we know customers are doing a ‘hack’ and want the cup filled up,” he says.

While the customer waits for their ‘hack’ drink, @the_hip_barista_ claims management puts pressure on baristas to not waste resources. “Then we get talked to by management that ‘we’re wasting product and that’s not recipe,’” he explains.

However, when baristas make drinks to management’s specifications, the TikToker says customers are unhappy. Wanting to “make the moment right,” management then urges employees to remake the drink.

Just a few of these interactions could mess up an entire shift, he explains.

Most commenters agreed with his calls to end “hack” orders.

“I hate getting these stickers in the time it takes me to read the modifications I could have made the actual drink,” another claimed.

A third user claimed their Starbucks location refuses to comply with customers’ cost-saving hacks. “The amount of people who get mad at us because our store never fills it up we strait up tell people to order lattes, we will not do the hack,” they said.

“The “hack” is force the minimum wage worker to give them stuff for free,” @the_hip_barista_ responded.

Many also pointed out that if cost-saving is a concern, special add-ons could be made at home instead of in the drive-thru line.

“Order the ‘hack’ with no milk and go home and add the milk yourself…., you make our lives easier and you get the cheaper price,” one user wrote.

“Fr if you really need to save the $4 just get a couple syrups and start making your coffee at home,” another said.

The Daily Dot reached out to @the_hip_barista_ via Instagram direct message.