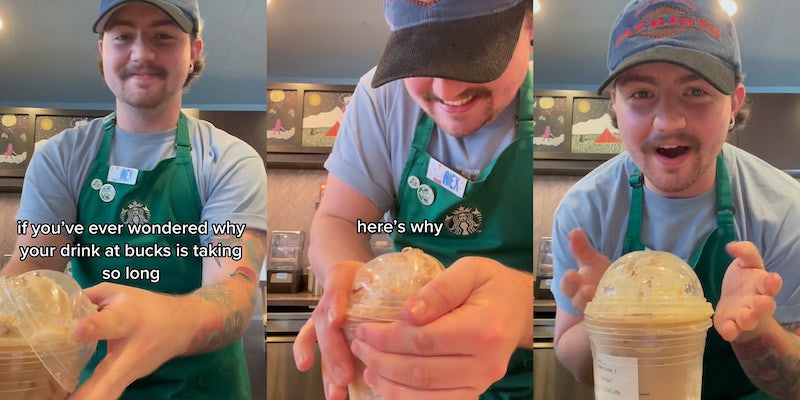 ‘If you’ve ever wondered why your drink at bucks is taking so long’: Starbucks worker exposes problem with dome lids

'then it like caves in on itself and you just stand there now drenched in coffee.'

If you’re ever wondered why your drink at Starbucks is taking so long, TikTok user and Starbucks worker @pinknuckles has an answer: it’s the darn lids.

In a video with over 108,000 views, @pinknuckles shows an iced coffee drink that is filled to the brim. Over the course of 30 seconds, he repeatedly attempts to put a dome lid on the drink, which leaves room for whipped cream, even swapping the lid for another one halfway through the video.

In the comment section, Alex notes that he’s made multiple attempts to ease the process, even adding a second cup for extra strength while he applies the lid. Still, the lids never seem to cooperate.

Viewers and alleged Starbucks employees in the comments chimed in to share their mutual frustration.

“Those lids are straight from hell,” stated one commenter.

“I thought we were the only ones who got a box of lids that didn’t want to cooperate,” offered another.

“Those lids are THE worst,” vented a third. “It makes me irrationally mad when I have to try like 7 different lids & the drink spilling just to get the lid on.”

“and then you put to much pressure on the second lid and completely smash the drink during peak,” said a user. Alex responded by saying he too had experienced this.

“I tried putting a lid that popped off back on at home and spilled half a venti on my beddd,” recounted a second.

“then it like caves in on itself and you just stand there now drenched in coffee,” agreed an additional TikToker.

This appears to be a common complaint amongst Starbucks workers. Several threads on Reddit voice similar frustrations, with many users alleging that some lids will simply never work, no matter how much effort the employee puts in.

“I hate that half work great and the other half don’t,” wrote a Redditor. “Thanks lids. I wanted this drink all over the counter today.”

“We’ve had so many more issues with the dome lids over the past couple of months. Even our most experienced baristas are having issues. I’ve seen cups get crumped and major messes. People ask for help from others. I’ve seen them go through 3 or 4 lids trying to get one to fit correctly,” recalled another Redditor. “Either the lids changed or the cups changed. I don’t know which, but I really feel like something was changed with them.”

We’ve reached out to Alex via Instagram direct message and Starbucks via email.