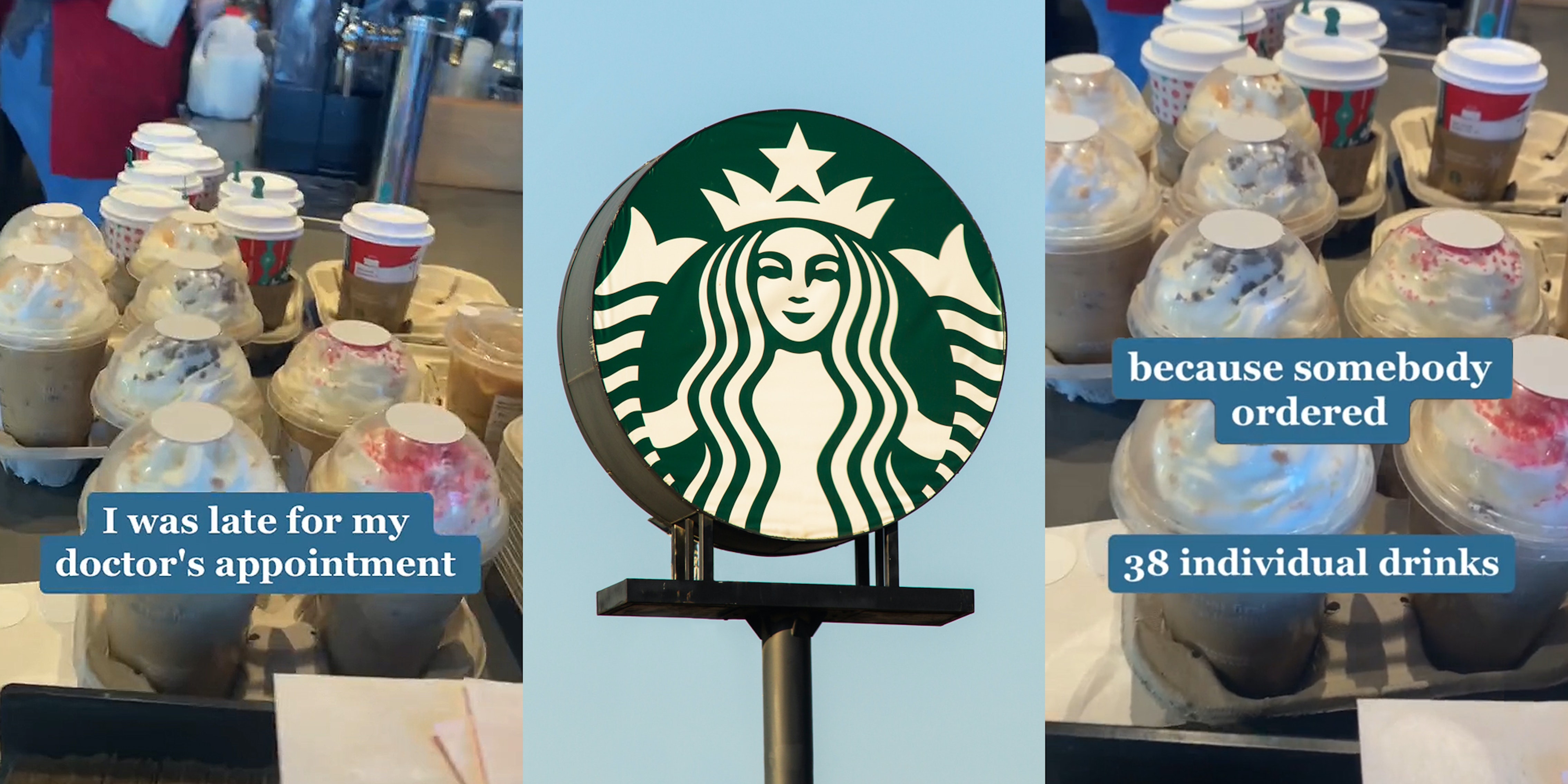 ‘I was late for my doctor’s appointment’: Starbucks customer says someone ordered 38 individual drinks, sparking debate

A woman went viral on TikTok after sharing how she was late to her doctor’s appointment because a customer ordered 38 drinks at Starbucks.

The video was recorded by user Jaclyn (@teacherinreallife) as she filmed the counter of a Starbucks location she was in. In the clip, there are numerous drinks in drink carriers on the counter, from frappuccinos to coffees. According to Jaclyn, she was “late to her doctor’s appointment” because “somebody ordered 38 individual drinks.” In the background, baristas are making even more drinks.

Jaclyn added in the caption, “They were doing their best. My drink took 25 minutes.”

The video amassed 1.1 million views as of Friday, with many viewers criticizing Jaclyn for prioritizing coffee over her doctor’s appointment.

“Or hear me out. Go to your appointment and stop by afterwards,” one viewer suggested.

“Then get the drink after the appointment,” another echoed.

“You were late because you prioritized the coffee, if it was gonna take too long then you move on,” a third criticized.

“No. You were late because you waited for a coffee. If you were that close to the time,… genius move here,.. don’t go for coffee first,” a fourth said.

Others speculated who might’ve placed the large order.

“Probably a doctor’s office or a hospital floor ordering drinks,” one person proposed.

“Plot twist: It was your doctors office!” a second joked.

“Someone probably late for work and they gonna use the excuse that they got everyone in the office starbucks,” a third said.

“It’s most likely a doctors order, they r suppose to bring in the list and we hav to have it done by a time. it happens. u couldve left and came bak,” another viewer wrote.

Some even shared their experiences with people ordering huge orders in front of them.

“We’re a licensed store and have this one small vet clinic come in once a while and get 60$ worth of drinks and sandwiches,” one person shared.

“This morning I saw a guy in a suit with a legit plastic bucket and he filled it with 20 drinks i was right after him,” a second commented.

“We’ve had multiple people get off an hour later because a single man orders $500 worth of our food,” another user said.

Jaclyn addressed the backlash she received, writing in the comments, “Y’all are so silly. 1. I figured 30 min was PLENTY of time 2. I’m not mad, or mad at the baristas. 3. It’s a 7 sec video, it’s not that deep.”

The Daily Dot reached out to Jaclyn for comment via TikTok comment and to Starbucks via email.