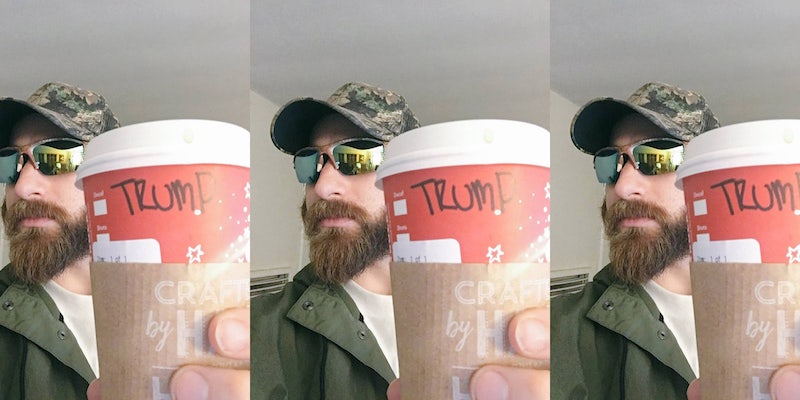 Trump supporters are making a statement against Starbucks by providing baristas with 'Trump' as their name.

Starbucks just couldn’t escape controversy with its coffee cups this holiday season… again. Trump supporters are protesting against Starbucks with #TrumpCups. When ordering, they provide the barista with their name as “Trump,” and if the barista fails to do so, the incident is recorded and uploaded online.

Prominent Trump supporter and Breitbart social media strategist Baked Alaska (aka Tim Treadstone) posted instructions on Twitter in a tweet has since gone viral. Users are uploading their Trump cups along with the hashtag #TrumpCups.

Supporters claim to have been discriminated when providing baristas with their name as Trump.

#TrumpCup comes after another year where Starbucks’ wintertime cups have caused controversy. The coffee chain has been using red cups instead of a more festive, holiday-themed design, which some see as a war against Christmas.

Supporters have also taken this as a chance to criticize the media, as CNN’s coverage did not include the video where a barista fails to write Trump down and calls the cops.

Starbucks employee refuses to write Trump on this mans cup and even calls the police. #TrumpCup pic.twitter.com/2VnSiyjyzs

FAIL @CNN attempts to cover #TrumpCup excludes vid of @Starbucks refusing to write Trump on a cup&calling the cops. https://t.co/NgGw9RBD0r

Regardless of Trump supporters’ complaints against Starbucks, the #TrumpCup movement still requires that they spend money at a chain whose CEO has been a vocal Hillary Clinton supporter.