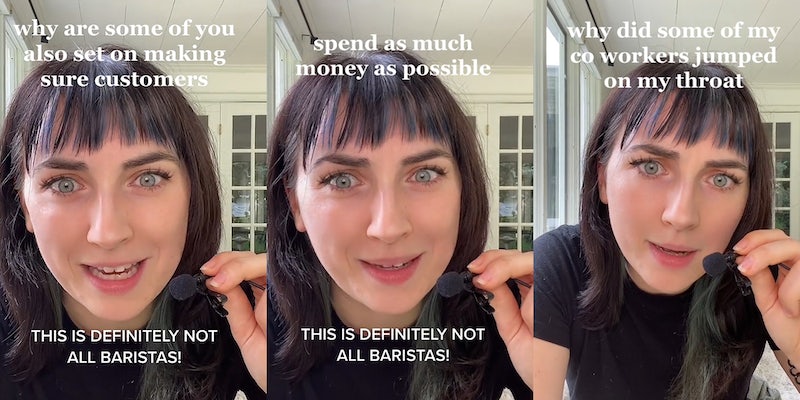 ‘Why not let her save some money?’: Starbucks barista calls out co-workers who criticized her for helping a customer save money, sparking debate

'I usually tell people if there is an easier way to order something for cheaper.'

A TikToker user named Mandy (@thebudgetingbarista) recently went viral after uploading a clip where she called out Starbucks baristas who seemingly get upset at other workers who try to save customers money.

Mandy relayed a story about one regular who frequents the Starbucks she works at and orders the same drink every day. Since Mandy realized that this woman orders a beverage with very little milk then she shouldn’t be charged for that milk. So, she showed the customer how to order the beverage on the Starbucks app, and the little bit of customization ended up saving her a couple of dollars.

Savings that the customer then, in turn, ended up transferring as tips to the baristas on shift. Mandy thought that because she saved the customer some money and then those savings ended up in the tip pool, her co-workers would be happy and/or appreciative. However, the TikToker says that this isn’t the case.

“Baristas, can I ask you a genuine question?” she says in the viral clip. “Why are some of y’all so set on making sure customers spend as much money as possible? The other day there’s this regular that comes in. Super nice, she always tips. I’ve been trying to catch her for months because she always mobile ordered.”

The TikToker then presents a screenshot of the order that this particular customer makes every time she visits the Starbucks and rattles off what it is: “Grande Iced Quad Mocha with extra extra ice…caramel drizzle.”

She adds, “There’s barely any milk in this thing it’s mostly ice and espresso shots. She orders this every day. I showed her how to order on the app an iced white lightning and she’s like oh this is great I prefer it with less milk in it anyway…saved her a few dollars.”

However, she went on to say that looking out for the customer wasn’t necessarily met with a positive reaction from her co-workers. In fact, she says that they were quite upset at the fact she decided to go and try to save the woman some money, even though she’s a great tipper who goes out of her way to leave a decent amount of money for the employees at this Starbucks location.

“Why did some of my co-workers jump down my throat? She tips us the difference? I’m making the exact same thing. Why not let her save some money?” Mandy says.

Many other users on the popular social media platform expressed that they shared the same exact mentality as Mandy at their own Barista jobs.

“yeah that 2 dollars isn’t gonna make a difference for the company so I don’t get it,” one top comment read.

“I mean I’m going to get paid the same regardless of what they do but might as well save them some money while I’m at it. [I know] we’re all struggling rn,” another user wrote.

“It’s not even like you get the money directly UNLESS IT IS A TIP like why make them spend more just help them save money,” one user wrote.

“I literally tell people how to order their drink cheaper because I feel so bad looking at the price of one drink,” another shared.

Mandy herself added in the comments section, writing, “Even if we split the tip, her giving us the larger tip now will make a MUCH bigger difference to us than the potential labor…MY BIGGEST COFFEE MONEY SAVING TIP: BE NICE TO YOUR BARISTAS.”

Some folks who worked at Starbucks and saw Mandy’s clip responded with their own money-saving tips on popular beverages.

“No bc I’m the same way, I showed all my dirty chai regulars to order a latte with chai and the next person in line acted like it was their business,” they wrote.

And while there were some who believed that it’s ultimately beneficial for employees to maximize the profit of each and every beverage they sell, others argued that by showing customers how to save money on their drinks, then said customers will more than likely want to return to that Starbucks to order from them again and again.

“I usually tell people if there is an easier way to order something for cheaper, i never saw a reason not to,” a user wrote.

The Daily Dot has reached out to both Mandy and Starbucks via email for further comment.