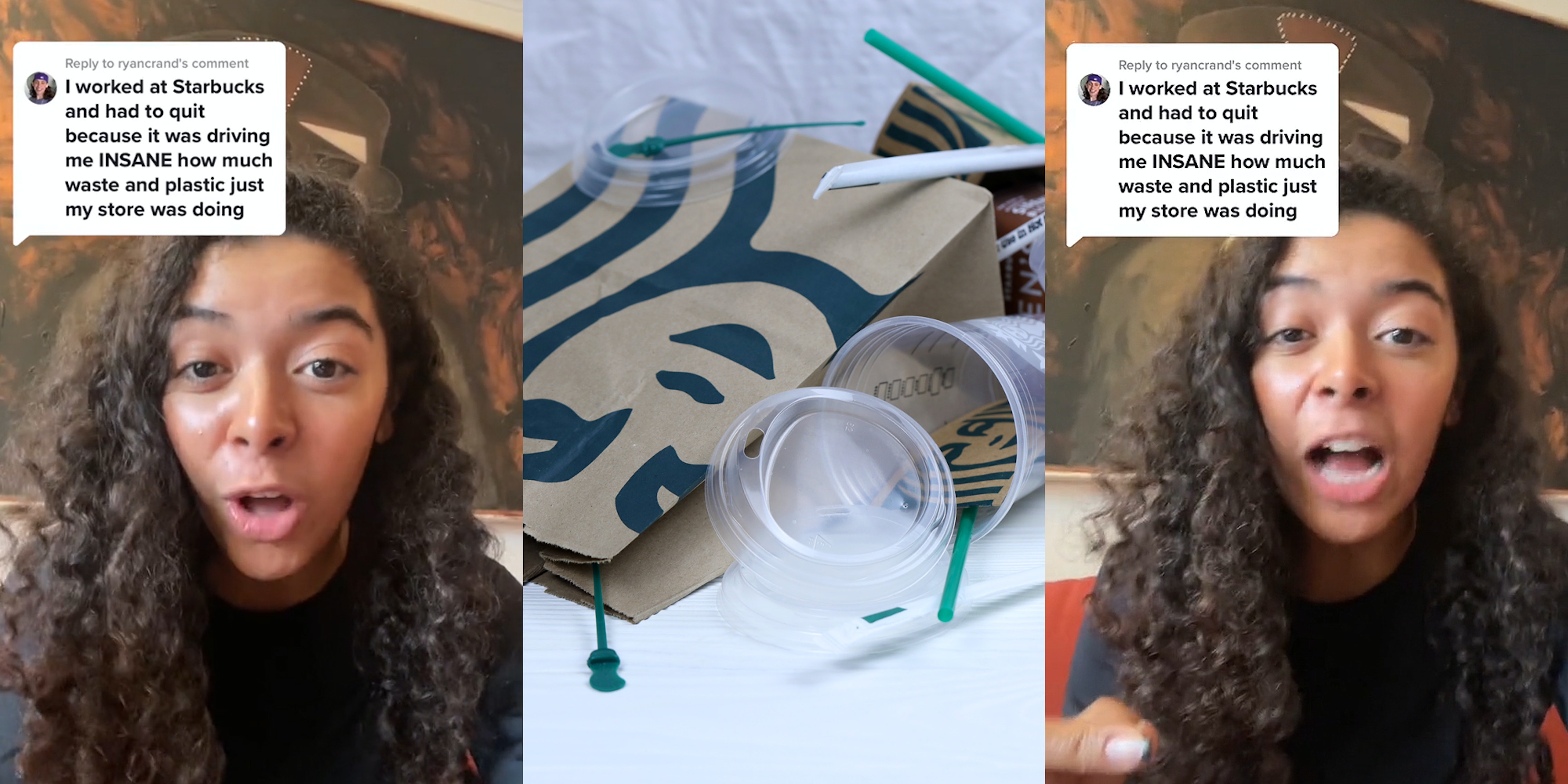 ‘The amount of plastic that is wasted in Starbucks is unreal’: Starbucks barista says she quit over the store’s overwhelming plastic waste

'Wait until you find out how many stores fill landfills when stuff doesn’t sell.'

A former Starbucks barista went viral on TikTok after revealing how much her store wasted in plastic, causing her to quit.

The video was uploaded by user Gabrielle (@eco_og) who mainly posts content about how to be environmentally friendly. In the clip, she responds to a comment about how much plastic Starbucks wastes. She agreed with the comment, replying by recounting her experience with how much plastic she saw the coffee chain wastes.

“The amount of plastic that is wasted in Starbucks is unreal,” Gabrielle starts in the video.

Basically “anything that touches the ground has to be thrown away,” Gabrielle says. She claims there have been numerous occasions where she has seen baristas restock the shelf of cups only to have them fall and end up being discarded.

She argues that they can “sanitize all of the cups,” but they still make them throw in the trash. During training, Gabrielle claims they “don’t have reusable cups,” and as a result, any cup used during training gets thrown out. There was an instance where an entire box of “hundreds of cups” were tossed in the dumpster because there was no space for them, the TikToker says. Gabrielle claims the plastic waste and the E-coli in the ice bins, which she says was a result from lack of cleaning them, led her to quit.

The video was viewed over 18,000 times as of Sunday, with viewers sharing what other products get wasted.

“My manager adds to the waste by not letting us take home any of the EXPIRED FOOD if he’s closing!! ITS GOING IN THE TRASH LEMME TAKE IT BRUH,” one viewer shared.

“This!!! we once had to toss an ENTIRE FROZEN ORDER because the delivery driver didn’t put the trays in the fridge,” a second stated.

“Girl the amount of milk that gets wasted just because of fifo,” a third wrote.

“Wait don’t forget the amount of food Starbucks wastes everyday just for the display case to be changed everyday but they’re big on not wasting straws and stoppers like???” another added.

Others stated how Starbucks isn’t the only establishment that is wasteful.

“Same thing with auntie Anne’s except our were paper based with a plastic coating? anything i dropped the cups i would just take them home. it’s been 6 years and i think we still have a few remaining cups,” one person shared.

“It was like this at Dairy Queen,” a second said.

“Same thing with airlines! It’s sad to see how much waste there is!” a third claimed.

Gabrielle replied to the comment, writing how she tried to curb the plastic waste.

“Ugh!! I was always so stressed having to throw that much away,” she commented.” I used to try to collect recycling and take it home at the end of the day lol.”

The Daily Dot reached out to Gabrielle for comment via email and TikTok comment and Starbucks via press email.