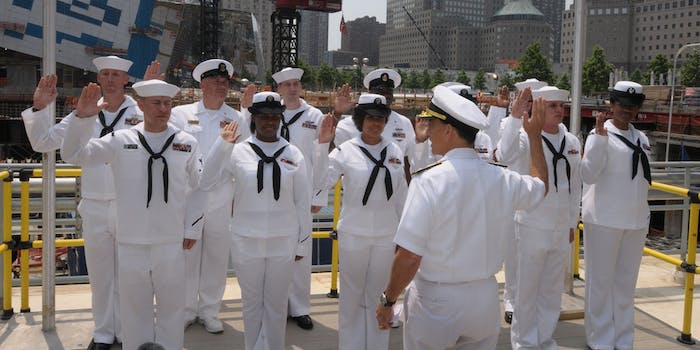 This should probably go without saying, but here’s a little tip for swanky New York City hotels: If service men and women show up to your bar in uniform, it’s probably not a good idea to kick them out for violating the dress code. Especially on Memorial Day weekend.

That’s what happened on Saturday night when a Navy officer and her three relatives tried to visit the Top of the Standard lounge at New York’s Standard Hotel. They were turned away by a bouncer before they even got to the elevator, even though the naval officer, who wishes to remain anonymous, was wearing her white uniform and her family members were dressed in cocktail attire.

Ryan O’Conner, one of the members of the sailor’s party, described the incident to the Daily News: “I said, ‘Wait, are you rejecting us because someone is in a service uniform?’ He kind of rolled his eyes and wouldn’t budge.” (For the record, O’Conner says he was wearing “a $400 blazer and dress shoes.)

Following the incident, the naval officer’s family complained to the hotel’s front desk, where they were told that admission was at the “lounge’s discretion.” The lounge website states that cocktail attire is required for entry, but it doesn’t go into specific detail as to what constitutes proper garb.

The naval officer’s family later filed a complaint with the hotel, with one of her family members writing on Facebook: “Apparently being willing to die for your country isn’t fashionable enough.” A representative later emailed the family to apologize and invite them back to the rooftop bar.

“We most certainly do appreciate and take a lot of pride [in] all the young people giving their lives to defend our nation,” read the email from manager Nayara Branco.

Branco’s email also stated that the Standard’s dress code should not apply to service uniforms and that the issue had been addressed with the entire staff.