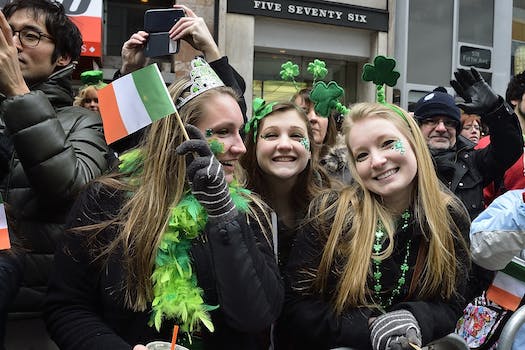 New York’s St. Patrick’s Day parade is as homophobic this year as ever

This year, NBC's LGBT employees get to march in the St. Patrick's Day Parade. But not other LGBT groups.

Though headlines have touted this year as the first time LGBT groups will be allowed to march in NYC’s St. Patrick’s Day parade, it’s technically inaccurate in two important ways.

While most Irish LGBT groups continue to find their parade applications denied, parade sponsor NBC, which airs the festivities nationally, struck a historic deal last year that allows its corporate LGBT employee group, [email protected], to march in the parade.

But [email protected] is the only group from the LGBT community allowed past the barricades—a move that has enraged many, including the group Irish Queers, which is holding its annual protest on parade sidelines again this year.

It’s also not the first time an LGBT group has marched in the parade. That distinction is owed to the Irish Lesbian and Gay Organization (ILGO), which marched in 1991 after then-mayor David Dinkins brokered a deal. After the mayor and marchers were struck with beer cans and shaken by booing and hate speech, Dinkins likened the experience to the Civil Rights Movement and to “marching in Birmingham, Alabama.”

On March 11, MSNBC’s openly gay host Thomas Roberts and NBC diversity officer Craig Robinson discussed the NBC employee group’s inclusion in the parade on MSNBC’s Shift. Robinson said that it was never the employee group’s goal to be the only LGBT group allowed to march.

“We agree that the parade should be more inclusive than this move even indicates. But what we know is that sometimes progress comes in steps,” Robinson said. “We are excited to be the first group to help break the ban, with the hopes that in subsequent years the parade will be much more inclusive.”

“Some groups have fought for decades to march, and that’s why they are so upset that they are not able to march. We know that, we acknowledge that. We hope that… after this year [the committee] will feel much more inclined to open the parade up to other groups,” Robinson said.

In an email to the Daily Dot, Robinson issued the following statement:

“As a group that has long fought for inclusion and equality for our employees, we are mindful of the efforts of others, both within and outside of the company, that have led us to this historic point. We approach the opportunity with respect for the event’s heritage, culture and tradition, as well as hope and excitement for this first step towards an increasingly inclusive era for the Parade.”

But LGBT groups that have been fighting for entry to the parade for years aren’t satisfied by NBC’s statement. In a Mar. 16 tweet, Irish Queers, which has organized the annual parade protest for over 20 years, expressed resentment at the NBC group over the video.

Irish LGBT voices all say @OUTNBCUniversal is hurting us – now NBC claims 2 stand on our shoulders. Necks, more like! http://t.co/ppOX0ETOnK

Irish Queers is calling on allies to take part in its sidewalk protest during the parade.

In a sense, the group will be joined by New York City Mayor Bill De Blasio, who isn’t protesting but is boycotting the parade itself.

Mayor De Blasio also marched this year in the St. Pat’s For All Parade in Queens, which was founded by original ILGO member Brendan Fay as an all-inclusive alternative to the homophobic Manhattan parade.

At a March 7 press conference, De Blasio told reporters that he’d made an unsuccessful attempt at negotiations with the parade committee.

“People from my office have been in touch with the parade committee. And we’ve certainly talked to other interested parties. And I think a lot of people would love to find a compromise, but so far there has not been one,” said De Blasio.

“I think a lot of people would love to find a compromise, but so far there has not been one.”

Emmaia Gelman of Irish Queers said she wasn’t surprised that the mayor’s attempt at bridging negotiations between parade organizers and the LGBT community went nowhere.

“The only thing parade organizers have ever responded to is the withdrawal of corporate sponsorship,” Gelman told the Daily Dot. “They are truly, deeply, religious homophobes. They don’t care if people don’t like that. The only thing they give a shit about is if they have enough money to run the parade. Unless the Mayor is affecting that, nothing’s happening.”

Earlier this March, GLAAD (formerly Gay & Lesbian Alliance Against Defamation) called on NBC to drop sponsorship of the parade.

“Why any LGBT group would want to roll along in a St. Patrick’s Day parade is beyond me. The whole thing is grim, tacky codswallop.”

“Until all are welcome—especially LGBT Irish groups, who have worked for decades to bring fairness to Fifth Avenue—parade organizers must be held accountable to ending this ban once and for all,” said the GLAAD statement released March 2.

Guinness and Heineken also dropped out of parade sponsorship last year in protest, but are back to sponsor this year’s parade.

Irish Queers drafted a letter to De Blasio’s office last year which continues to add more signatures. The letter, signed by many of New York’s LGBT organizations and city officials, points to the New York City Human Rights Law and asks that city employees, including police officers and members of the fire department, not march in a parade they say violates anti-discrimination laws.

Despite the controversy clouding the festivities, the majority of people discussing the parade on Twitter seem to believe the parade is now letting all LGBT groups walk. Many are expressing happiness over the parade’s supposed lift of the LGBT ban.

Get on your Green! Gay and Irish now marching together in the NYC St. Patrick's Parade. http://t.co/XA6cD0CiDk

But other Twitter users scoffed at the inclusion of a single corporate LGBT employee group in lieu of Irish LGBT inclusion.

Of course, not everyone wants to march in the parade. One Irish tweeter had this to say about St. Patrick’s Day in general:

Why any LGBT group would want to roll along in a St. Patrick's Day parade is beyond me. The whole thing is grim tacky codswallop.

Grim, tacky codswallop aside, there are many LGBT people, Irish and otherwise, who still dream of someday breaking down the barriers to inclusion at New York’s St. Patrick’s Day Parade.

As recently as this February, longtime Irish LGBT activist Brendan Fay told the Irish Voice that his group Lavender and Green Alliance wasn’t participating in the boycott because “there are conversations going on toward resolving this standoff and creating a space for inclusion. We may be there in a couple of weeks. This is a moment for reconciliation.”

Until that happens, there’s always the parade in Queens.