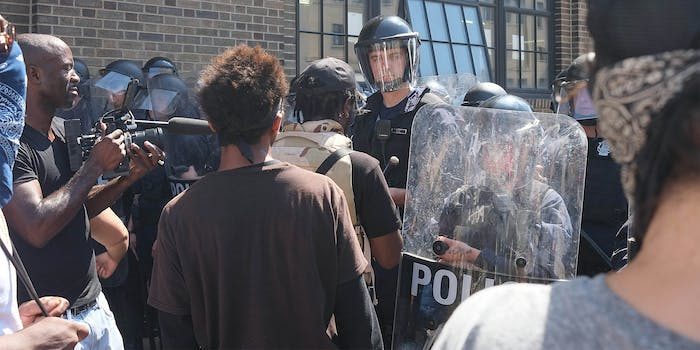 Police arrest 80, antagonize protesters with ‘whose streets, our streets’ in St. Louis

Officers say they were threatened with chemicals—but Twitter proves otherwise.

More than 80 people were arrested in St. Louis Sunday night, as the city embarked on its third day of protests against the verdict of Officer Jason Stockley, who was acquitted of the 2011 murder of black motorist Anthony Lamar Smith.

Sunday’s protest began peacefully after sundown at the downtown police station, according to the Washington Post, but once was it over, a few broke from the group and began smashing windows of businesses, overturning trashcans, and throwing rocks at police.

Protesters, however, claim that police were unnecessarily aggressive and provoked protesters, chanting, “whose streets, our streets,” in mockery of the well-known demonstration chant.

It was chanted twice, AP journalists heard it too, I confirmed w/ 5x civilians standing closer to cops who chanted & with 2x cops at scene https://t.co/syuuAfi2bM

Protesters, along with members of the press, also said that they were encircled by police after being told they had to disperse, making it hard to get out of the chaos. Just before midnight, police started arresting people.

Police, for their part, said that they were being threatened with chemicals. But Twitter quickly pointed out that a photo tweeted by the St. Louis County Police Department of an officer holding the “unknown chemicals” in question was clearly marked apple cider vinegar, which is used to counteract the effects of pepper spray.

You forget to blur it? pic.twitter.com/lvMEOOgsrh

Early Monday morning, Interim Police Chief Lawrence O’Toole gave a press conference in which he referred to those arrested as “criminals” and said the police “owned tonight.”

“These criminals that we’ve arrested should be held accountable and prosecuted to the fullest extent of the law,” he said. “We’re in control. This is our city, and we’re going to protect it.”

He continued: “I’m proud to tell you the city of St. Louis is safe and the police owned tonight. Once again, a group of criminals set out to break windows and destroy property. Tonight, those criminals are in jail.”

On Friday, Stockley, 36, was found not guilty of the first-degree murder of 24-year-old Smith. Stockley and his partner began pursuing Smith after believing he had been involved in a drug deal, leading to a high-speed chase and ending with the officer fatally shooting Smith. The prosecution said Stockley was heard saying, “Going to kill this motherfucker don’t you know it,” before telling his partner to drive into his car. Prosecutors also alleged that Stockley planted a gun in Smith’s car since it had his DNA on it, not Smith’s.

On Sunday, it was reported that the Justice Department wasn’t going to pursue the case further as a civil rights violation—a decision that was made a year ago but wasn’t announced until this weekend.