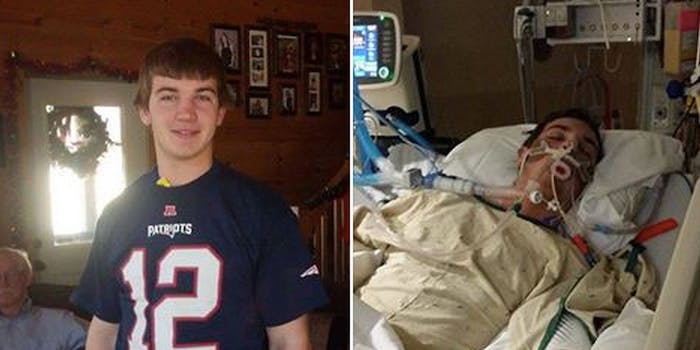 A St. Louis mom's story of her son's overdose serves as a warning to all parents.

A St. Louis mother took to Facebook to raise awareness of heroin addiction by sharing her son’s personal story.

Kelly Smith-Miller posted photos of her son Brayden Travis, 18, on Facebook. One of the photos showed him smiling and happy. The other showed him hooked up to a hospital bed following a heroin and Xanax overdose. 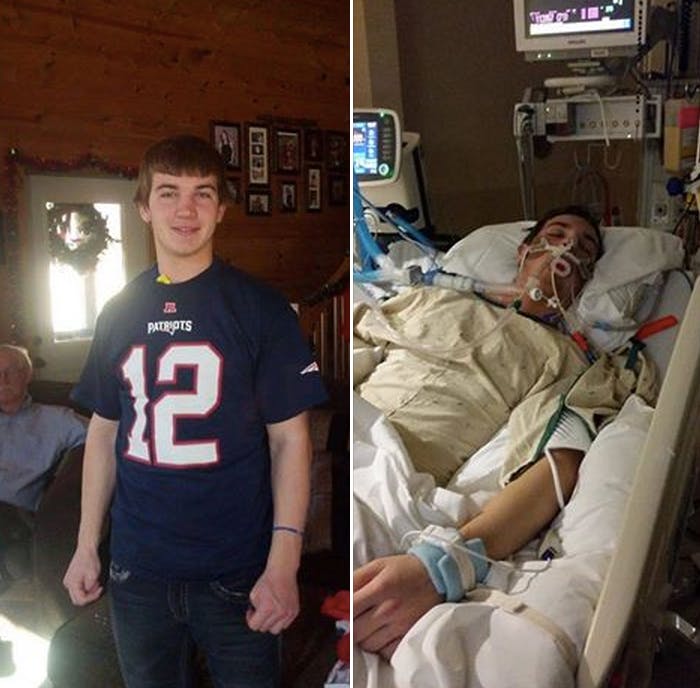 The photos were accompanied a message explaining what had happened to Brayden.

My son is an addict and has struggled with drugs since he was 15 years old. My son’s first choice of drug was marijuana, which in time led to other drugs. The ultimate dead end road drug for my son was heroin, as is for a lot of teens/adults. He used last Wednesday at some point in the night and overdosed from a very deadly cocktail of heroin & Xanax. Heroin alone will kill you, as well as Xanax. He laid for at least 7 hours or longer before he received medical attention due to no one calling 911, possibly in fear of suspected consequences. Medical personnel believe my son should have been dead long before he was able to get the medical attention he needed, but for some unknown reason he has stabilized. His lungs and kidneys had failed and his heart was functioning at 10-20%. His body temperature was 90 degrees and was very cold to the touch. Brayden ended up with severe pneumonia from aspirating. I was told by two doctors he wouldn’t make it through the night. Brayden has pulled through all of it besides the damage to his brain. While overdosing and in nonresponsive state, Brayden suffered a stroke. He has experienced severe damage to the Hipocampus and Cerebellum parts of his brain.

The incident left Brayden in a coma. He’s now awake and breathing on his own, but his reactions to various stimuli are inconsistent, according to the St. Louis Post-Dispatch.

But Smith-Miller’s update wasn’t just about her child’s life. She wanted her son’s story to serve as a warning to other parents.

I share this with each of you in hopes that you won’t feel pity or be offended, but rather share and get these pictures in front of your teenagers. Don’t be scared to share the horrific outcome of what most likely will happen when using heroin! It’s not the only drug that will kill you either.

Travis’s story is one that is sadly all too common in St. Louis County. The National Council on Alcoholism & Drug Abuse – St. Louis Area shared the following chart with the Daily Dot, which demonstrates the dramatic rise in heroin and opiate-related deaths since 2007.

According to the NCADA’s data, this year 62 people aged 18-24 have fatally overdosed on heroin and other opiates.

Jared Opsal, a public awareness specialist at the NCADA, says that Smith-Miller’s decision to share her son’s story could ultimately help other families.

“Sharing a personal story of recovery or a tragedy such as Brayden’s is a deeply personal choice for each person and family,” Opsal wrote in an email to the Daily Dot. “People need to be educated about solutions to the problem and where to turn for professional help, and we commend the Travis family for sharing their gut-wrenching story in an attempt to raise awareness about this public health crisis.”