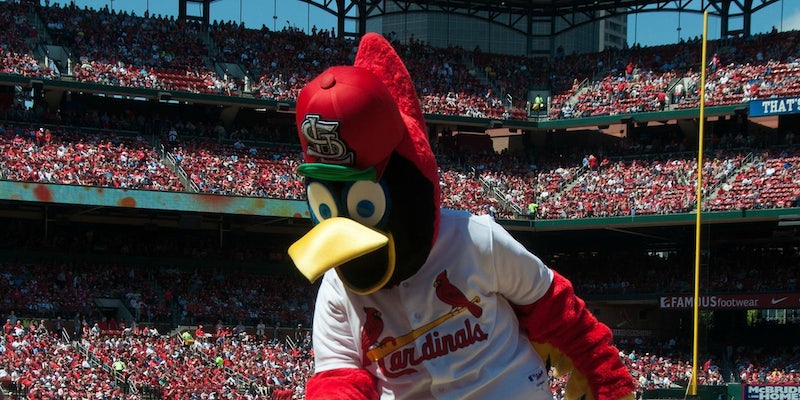 The Cardinals want the St. Louis PD to stop using their mascot in #PoliceLivesMatter photos

Mascots should be free from politicization.

Following a week of controversy surrounding a Facebook photo of St. Louis Cardinals mascot Fredbird holding a “Police Lives Matter” sign, all involved parties have officially distanced themselves from the gesture.

That would be the St. Louis Police Department and the Cardinals, which asked the police to remove the image from their Facebook page.

“Police Lives Matter” is a component of the #AllLivesMatter social media campaign that sought to neutralize #BlackLivesMatter protesters calling attention to police violence. #BlackLivesMatter emerged from the protests in Ferguson, Mo., over the death of Michael Brown. #AllLivesMatter has been criticized for blurring the original context and changing the conversation from its core focus on racial oppression.

Last week, Deadspin brought attention to the photo and took the Cardinals organization to task for allowing Fredbird to become a politicized symbol. In a post titled “Your Racist Uncle Will Love This Picture Of The Cardinals’ Mascot,” the site was critical about how easy it is to book Fredbird without more careful review:

We emailed the Cardinals employee in charge of handling Fredbird’s bookings, just to see what the process is for getting him to attend shitty events. This is what she told us:

Tom, Fredbird is available for hire for any type of event—birthdays, weddings, bar mitzvahs, community events, visits to nursing homes, charity events, etc. To book him you just need to fill out an application. Hope that helps.

Although St. Louis police have been using the photo, it doesn’t appear to be from a St. Louis Police event, but rather from a May 17 Cardinals game. The sign was reportedly handed to Fredbird, who apparently didn’t even read the politicized language.

“A man and a woman stopped Fredbird to request a quick photograph,” Cardinals Vice President of Communications Ron Watermelon said in a statement. “While the man was taking the picture, the woman standing next to Fredbird asked him to hold up the sign. Fredbird was unaware of the content of the sign.”