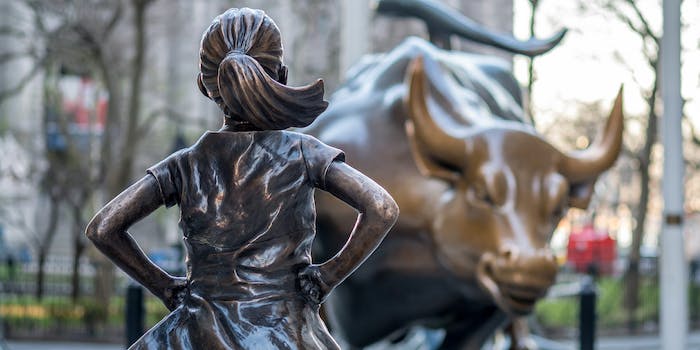 The hirings contradict the statue's mission.

When “Fearless Girl” made her debut on Wall Street for International Women’s Day—hands on her hips, staring down the intimidating “Charging Bull” sculpture—the immediate response by feminists was a near-resounding “yessssss.” Then, as they do, people grew skeptical. Was this bronze little girl simply a symbol of strength and encouragement in the face of adversity?

Turns out, not really. It was soon revealed that an advertising agency paid by an investment firm was behind the statue’s creation. The firm, State Street Global Advisors (SSGA), promised its intentions were good, however, saying “Fearless Girl” was erected to send the message that more women need to be hired in corporate leadership positions.

Two male hires wouldn’t be a big deal if, say, the rest of the executive lineup at SSGA was at least close to 50-50 male-female. But the Voice found that men make up 82 percent of its leadership team. (Even Goldman-Sachs does better with 21 percent female leadership, according to Business Insider.) When asked by the publication about it, Andrew Hopkins, public relations assistant vice president at SSGA’s parent company, State Street Corp., pointed out that a woman was recently promoted to the management committee of the corporation—bringing the total to three women out of 15 people on the team.

Hopkins also said the company has a three-year diversity plan in play (leadership is also resoundingly white) and is aiming for 28 percent of senior managers to be women by the end of the year.

Perhaps the first step to attaining that goal would be to hire an actual woman, though? Just a thought.