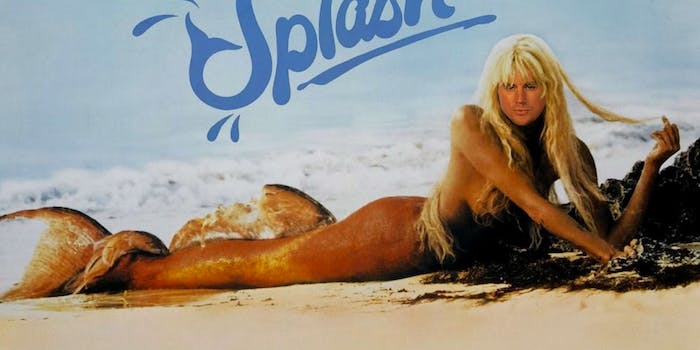 Channing Tatum to play a merman in ‘Splash’ remake

We're all the same 'down there' when we have fin-tails.

The internet raised its collective hands in praise on Monday as news hit that a new remake of the classic 1984 film Splash would star Channing Tatum—as the mermaid.

OK, merman, if you want to get technical about it, or quote Derek Zoolander.

But who cares? When you have a fin-tail, it’s unclear what is going on “down there” at all.

What we do know about the Splash remake is that signing Channing Tatum to play the role originally occupied by 80s sex symbol Daryl Hannah (and comedian Jillian Bell in the original Tom Hanks role) continues a well-overdue trend of Hollywood gender role-reversals, following on the heels of the all-female Ghostbusters remake.

The original Splash was—let’s be real—masturbatory material for teenage boys (and more than a few girls too) upon its release. The storyline revolved around a gorgeous topless woman who can’t talk, walk, or run away, but who falls in love with harmless Tom Hanks and basically stalks him across oceans in order to return his wallet. Then she gets legs, he decides her name should be Madison, she does a bunch of charmingly dumb stuff, and they have sex or whatever. Basically, it’s the ultimate straight male fantasy.

But the new Splash may turn that fantasy on its head—or at least have lots of naked Channing Tatum in it.

As crybabies proclaimed all over the internet during the year that Ghostbusters was in production, gender-reversal remakes ruin men’s childhoods. Maybe Splash will be the final blow to any leftover fragile egos, replacing them with a generation of confident young girls—and boys who are secure enough in their masculinity to appreciate when a lady gets a turn at taking the lead once in a while.

The casting isn’t the only aspect of the Splash remake that puts women in lead roles. According to Deadline Hollywood, Anna Culp will serve as executive producer on the Disney project, and the script will be written by Marja-Lewis Ryan, who recently adapted the Hollywood version of Sheryl Sandberg’s Lean In.

And yes, you can hear the sound of Gamergaters furiously typing anti-feminist hot takes as you read this.

An hour after the news was announced, neither Tatum nor Bell had remarked about the film on social media. But Deadline Hollywood reported that the Ghostbusters-like reversal of gender roles was indeed Bell’s own idea. The comedic actress, best known for roles on Workaholics and Idiotsitter as well as starring with Tatum in the film 22 Jump Street, recently announced via Twitter that she’d signed on to a project with Kate McKinnon and Emma Stone called Women in Business.