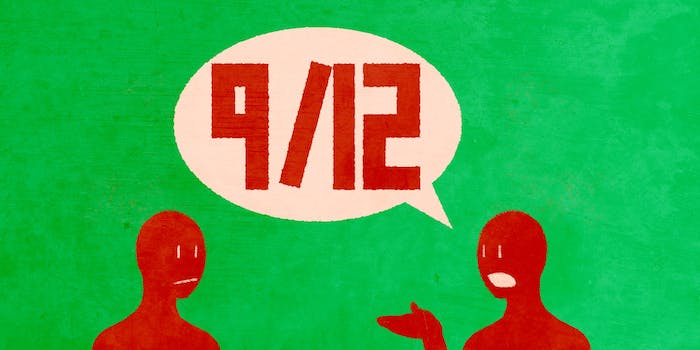 Why invoking the ‘spirit of 9/12’ makes me nervous

The days after 9/11 were days of fear for many Americans.

The things I remember about 9/11 are the things every other New Yorker who was in Manhattan that day remembers about 9/11. It was a clear day, the sky a shade of blue that still seems rare. I remember being confused and scared and distracted. The news was not delivered to me in one sentence—”Osama Bin Laden orchestrated an attack on American soil”—but in bits and pieces. A plane hit. It was a commercial plane. There were two. It was on purpose. By the end of the day, we finally pieced together what was going on, and by then I was too tired and numb to have much reaction.

Yesterday, Hillary Clinton said that, in the wake of the massacre at a gay club in Orlando, we need to channel “the spirit of 9/12.” On that day, she said, “We did not attack each other. We worked with each other to protect our country and to rebuild.”

I remember the air of camaraderie in Manhattan on that day. We brought coffee to the Canadian mounties who had come to help patrol our streets, and housed friends whose flights home had been cancelled. I did feel like we were coming together, that my city was tough, that we would survive.

In the days after 9/11, I noticed an American flag sticker on the door to my dad’s apartment. It wasn’t there before, but now it stared me in the face—a waving flag with a word like “freedom” or “liberty” underneath it. My dad was a guy who decorated our bathroom with comics clipped out of the New York Press, so this sticker didn’t quite feel like his style.

As a mixed-race person, I have access to both white comforts and brown fears. My liberal spaces were full of people who would never blame the attacks on Islam, people who came together and understood the attack was an act of hate, not religion.

“I was afraid that someone would hear my name and think it sounded too foreign. My Indian family is Hindu, not Muslim, and it felt ridiculous to make that distinction. But nobody else was making it.”

But on the news, other things were happening. A Sikh man was killed in Arizona. A Muslim girl in Queens was bullied by students, and then sent home by teachers when she wouldn’t remove her head scarf. A wave of attacks came for those who “appear to be Middle Eastern.”

And so, the sticker. And then a Yankees cap. And then an American flag pin on his lapel. My dad has lived in America longer than he ever lived in India. He is proud to call the U.S. home, and he was as heartbroken and angry as every other New Yorker was after 9/11. So why these accessories now? Was it a show of solidarity or fear? I never asked him, but I felt both.

There are others for which the “spirit of 9/12” rings false. Hani Omar Khalil was living in midtown Manhattan during 9/11, working for a law firm. Though he was never personally attacked in the wake of 9/11, he did discover the prejudices of those around him.

“I had to be restrained from getting into a fight with someone at work (in the copy room!) who, referring to the Newsweek cover of a young Muslim boy carrying an assault rifle, casually said, ‘They’re raised to be violent,’” he told the Daily Dot over email. “And it angered me to be made part of a ‘they,’ a they with uniform attributes that I, or any one of us, could be reduced to in an instant. And I’d never once experienced this before in my life, including the previous 21 years I spent in some of the whitest precincts of the Midwest.”

For many, 9/12 wasn’t a day of healing and coming together, but the first day they were made aware that America still sees them as “other.” Beejoli Shah is an Indian-American woman who grew up in Los Angeles and attended a majority Asian school. But even in a presumably accepting space, she said anti-Muslim sentiment spread quickly, and people she knew were suddenly racially profiled. “It was the first time I ever had to worry about how I looked being a detriment,” she told the Daily Dot.

“I’m no critical theorist, but it felt like a binary had set in, between two very major poles of my identity, and there was the dawning realization that I could become a casualty of either end of it,” said Khalil. “I could just as plausibly be the victim of an terrorist attack as having to shoulder collective responsibility for it.”

Both Khalil and Shah say that the “spirit of 9/12” is not their truth, because it was meant as a balm for Americans who were looking for an “us v. them” fight. The idea is that America is not just united, but united against something, and that was what? Terrorism? Islam? Brown people? The circle kept expanding, and quickly encompassed anyone who looked the part.

To ask Americans to gather the spirit of 9/12 is to present a privileged and one-sided view of what that day was like. Many of us wanted to heal our own wounds but were too busy watching our backs. Americans did attack each other, under the impression that hurting brown faces was an act of protection. “When I hear the phrase 9/12, I hear an appeal to a moment I felt very much on the outside of, like I was suddenly watching a version of someone else’s country, not my own,” said Khalil.

The American flag sticker remained on my dad’s door until we moved. My family was never attacked and we never had our allegiances directly questioned. Unfortunately, that makes us lucky. I think back to what Manhattan felt like in those days after the attack, how my school helped those students and their families who lived downtown, how glad I felt to have safe spaces. And how I felt all the different parts of my identity—white and brown, American and Indian—pulling at each other, wondering whether that “spirit” was with me or against me.

There is not one spirit of 9/12. There never was. But the one Clinton names is one that united Americans under visions of whiteness and against any “others.” “The spirit of 9/12 is not for brown people,” said Shah, “no matter how much politicians say it is.”