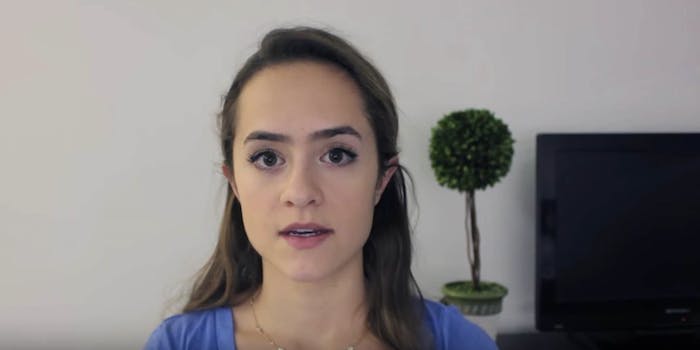 Maybe it was the time she heard a sorority sister say she didn’t want any FUPAs in the house. Or maybe it was the time she overheard another floating the idea of putting a weight-loss supplement in her sorority little sister’s gift basket. Really, it was an accumulation of stories like this that drove Alex Purdy to publicly share her video, “Why I left my sorority.”

Purdy, 21, is a senior at Syracuse University. Until last semester, she was a member of a sorority on campus (which she declined to name). Since pledging her freshmen year, however, Purdy grew disillusioned with the organization and Greek life in general.

“I wanted to make a huge university a little bit smaller and feel more comfortable at a new school,” Purdy told the Daily Dot in a phone interview, explaining why she rushed in the first place. “But it was really over time that I realized it wasn’t really aligned with my values.”

Sororities and fraternities are the focal point of social life at colleges across the country and Purdy says in her video she hopes that her soured experience is an “outlier.” But the infamous “cunt punt” email from University of Maryland and another email out of University of Southern California giving girls meticulous pre-bid day beauty tips, among many other examples, show that Purdy’s hope may be in vain. (That USC email read “Between now and Bid Day, you are not to leave the house without full hair and makeup. If you look at yourself in the mirror and don’t think you look good enough to make your boyfriend’s ex-girlfriend want to kill herself, you should stay home.”)

For months, Purdy, a public relations major, tried to figure out the words and format for sharing her complicated feelings about an institution that another Syracuse student, Victoria Valentine, compared to a cult. Purdy ultimately decided on a video for disseminating her message. As she explains in the video uploaded on Jan. 27, “no one should be made to think that outer appearance and what other people think is more important than who you are and what you can give.”

The video has more than 20,000 views, and Purdy said she’s received so many messages from people responding to it that she can’t even keep up with her inbox. Most of the messages are ones of support and encouragement, she said, not defensive Greeks angry with her for sullying their good name.

“There’s been people who reached out saying they had a similar experience. But there’s also people who’ve spoken out saying they didn’t, but they still support the message and recognize that it still goes on at some places,” Purdy told the Daily Dot. “So that’s really encouraging, because it shows that although not everyone experienced it, they recognize that we can all get behind the cause to make a positive change.”

Exactly how she is going to help make that change is still unclear. Right now, her chief motive is to open up the conversation about the systemic problems in a culture that she says is “built on such good intentions.”

Purdy recognizes that at her own university, there are unofficial “tiers” determining which sororities were the hottest/coolest, then the ones somewhere in between, and then the bottom tier, which fraternity men are basically told to ignore. While she wouldn’t say which tier her house fell in because she doesn’t believe in them, she did say “there’s a reason I was prompted to make this video—because I feel strongly about what went on.”

Syracuse University administration is aware of Purdy’s video and a spokesperson said it has “respect” for her message. Rebecca Reed Kantrowitz, Senior Vice President and Dean of Student Affairs, said in a statement provided to the Daily Dot:

“We want and expect every Syracuse student, whether a member of a Greek organization or not, to treat each other with kindness and compassion. We respect Alex for speaking out and applaud her for having the confidence to do so. Our goal is to provide a safe, positive Greek life experience and we have taken a number of additional proactive steps in recent years to do that.  This includes a wide range of programs to help sororities and fraternities communicate with their members on issues such as body image; alcohol safety; bystander intervention; civic responsibility; and sexual and relationship violence.  This is important work that will continue.”

Syracuse’s Panhellenic Council seems less concerned with taking Purdy’s message to heart, and seems more inclined to blow past it. According to student newspaper the Daily Orange, Panhellenic Council President Tristan Ruzic declined to comment specifically on Purdy’s video but said in an email, “As a community we are moving forward and focusing on all of the amazing things that the Greek Community has to offer.”

With or without the support of the university or Panhellenic Council, Purdy plans to forge forward with women from Syracuse who feel as she does, along with women from houses and chapters around the country. Together, they hope to see a #SororityRevamp, as Purdy called it.

Despite her negative experiences, she still wouldn’t discourage others from giving Greek life a go. “I think the most important part is for girls to go in and really hold onto their values,” she said. “Give it a try. There’s no reason not to give it a try. Tons of people have an awesome experience.”