'It’s not what you say: It’s the fact that you are a woman.'

All it took was one blog post for Soraya Chemaly to see the boundless harassment women are subjected to online. Overnight, her Twitter mentions were flooded with people viciously coming after not only her work, but her as a person. It was an unfortunate turning point, but one that ultimately lead her to help start the Women’s Media Center Speech Project, which launched Friday.

“After that, I realized, ‘Oh, people are very violent in their expression,'” Chemaly, 49, told the Daily Dot of her early experiences with harassment in 2011. The writer and a director of the project, which focuses “on the ways in which women’s rights and expression are affected by intersectional harassment related to their gender, class, race, sexuality, and more,” according to its site, co-launched the project with actress Ashley Judd. After facing extreme online harassment because of innocuous tweets about sports, Judd (a survivor of rape and incest) was appalled and, according to Chemaly, reached out to Women’s Action Media (WAM!) to make some actual changes. And that’s how the WMC Speech Project was born.

A conversation a few years back initially got Chemaly thinking about the way in which women are taught to simply accept that harassment is part of everyday life. Friends were swapping stories of their most serious online horrors, and while they were more and more appalled with each story, there appeared an unconscious instinct to normalize these experiences and simply move on.

“It’s one thing to insult someone or call them stupid,” Chemaly said. “It is a totally different thing to threaten people with violence that is linked to real threats of violence. Things like rape—women just have to take rape threats seriously… It’s wrong that we should have to incorporate it into our lives, professionally and personally.”

It’s not what you say: It’s the fact that you are a woman.

She’s actively tried to enact change for women online for the past few years, most notably by forming the Safety and Free Speech Coalition in 2013. The coalition brought together a group of women, like former WAM! executive director Jaclyn Friedman, who recently released a guide to managing online abuse (with Anita Sarkeesian and Renee Bracey Sherman) called Speak Up & Stay Safe. Together these women worked with tech titans like Facebook and Google to find actionable solutions to reducing threats and violence against women online.

Chemaly acknowledges some early successes with that project, particularly with Facebook and its push to address controversial, harmful, and hateful speech on its platform. In a 2013 post from Facebook VP of Global Policy Marne Levine, she openly admitted that there were failings in Facebook’s efforts to protect its marginalized users. She wrote:

In recent days, it has become clear that our systems to identify and remove hate speech have failed to work as effectively as we would like, particularly around issues of gender-based hate. In some cases, content is not being removed as quickly as we want. In other cases, content that should be removed has not been or has been evaluated using outdated criteria. We have been working over the past several months to improve our systems to respond to reports of violations, but the guidelines used by these systems have failed to capture all the content that violates our standards. We need to do better – and we will.

While a noble effort, much of Facebook’s plan was on the policy level and not so much concerned with changing the actual product through demonstrable commitments and benchmarks. That is what Chemaly sees as the essential problem with many social platforms’ efforts to address systemic abuse.

“There are people who says feminists want to suppress free speech. I think this is a very poor understanding of what constitutes free speech,” Chemaly explained. “On Twitter, anyone can say anything at any time. So I don’t think policy changes are ever going to solve this problem.”

But she’s sympathetic to the changes these companies are trying to enact, despite limited resources. “I do know now after working with these companies that there are individuals there trying to do the right things,” Chemaly said. “They hate that their product is being used in these ways.”

A big piece of the WMC Speech Project is a visual that they call the “Online Abuse Wheel.” On this wheel, you can see the different types of abuse women face: stalking, mob attacks, and impersonation and extortion, to name a few. The purpose of the wheel is not to simplify these acts, but to allow women to put a name to them and access the language needed in order to feel less isolated and address the issue—particularly for women who aren’t in the public eye. 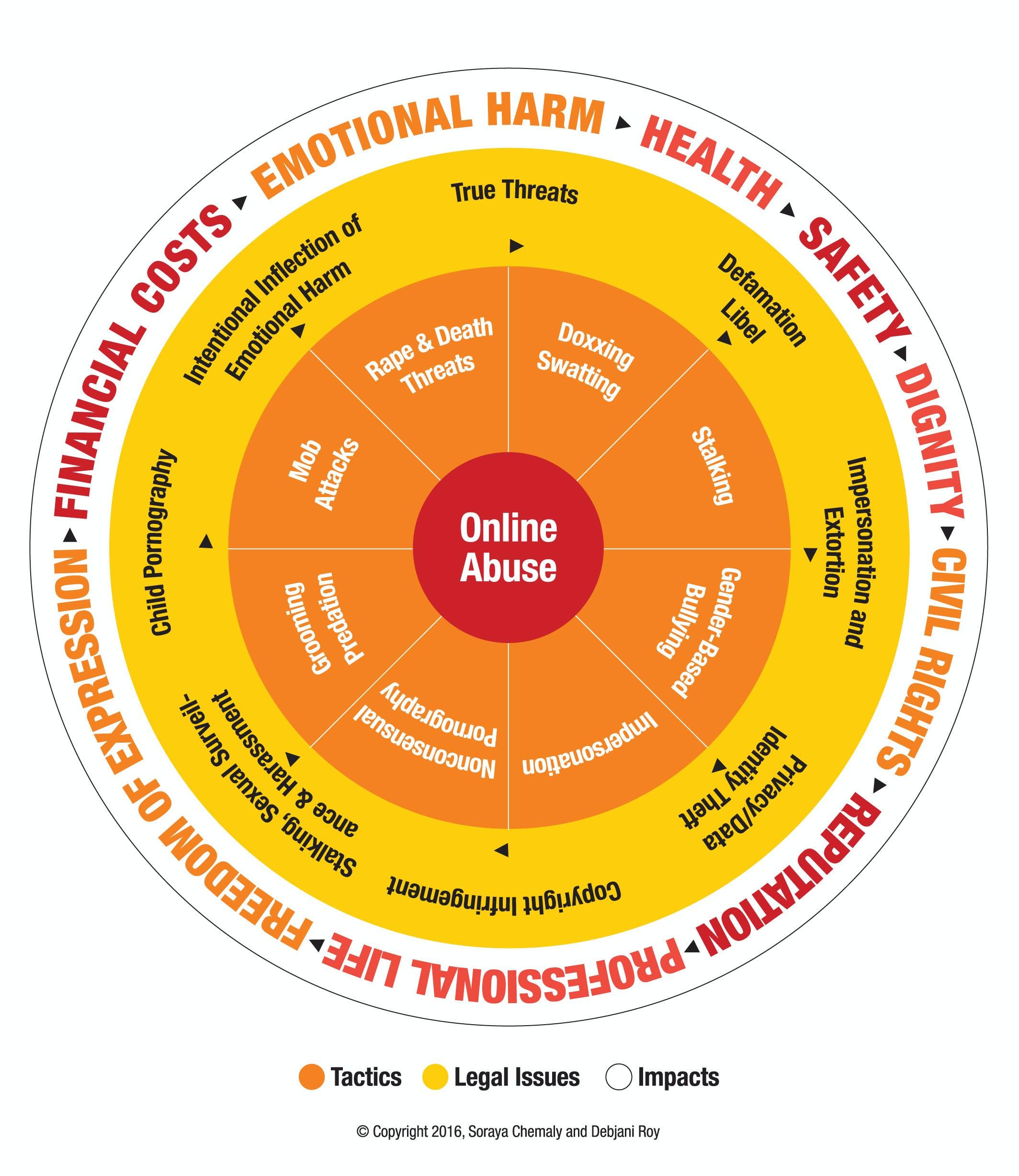 “I wasn’t the target of a mob assault, like some people are. It was more gradual,” Chemaly said of her online harassment. “What I realized was that it didn’t matter what I said. It’s not what you say: It’s the fact that you are a woman, that you’re a woman of color, that you’re a trans woman. It’s the fact that you are who you are saying something and claiming that public space.”

She continued: “I think that the degree to which this impacts our professional lives is underappreciated. But more importantly, if this is happening to us in this professional capacity, what is happening to women who don’t have recourse to these resources or to media or to understanding what exactly is going on when technology-enabled abuse is minimized and trivialized? It just disintegrates when they try to get help.”

Chemaly sees how this mirrors abuse in real life: the way women are subjugated, kept quiet, and told to just deal with it. But as a mother of three daughters who sees that women—from a local dental hygienist to House Minority Leader Nancy Pelosi—can be humiliated by men who hate them, she finally realized how much change needed to be made.

Twitter announced just this week the creation of its Trust and Safety Council, which will supposedly seek the council of outside organizations to establish better policies and tools to deal with abuse. But as of now, details are scant and, again, this appears to address things at a more surface level.

Chemaly recognizes the long road towards a cultural shift, but knows it’s not impossible.

“Hopefully things like this website will contribute to a shift in our culture,” she said. “We can say that we as [Internet] users and as people don’t want this to be the environment that people have to live and work in.”