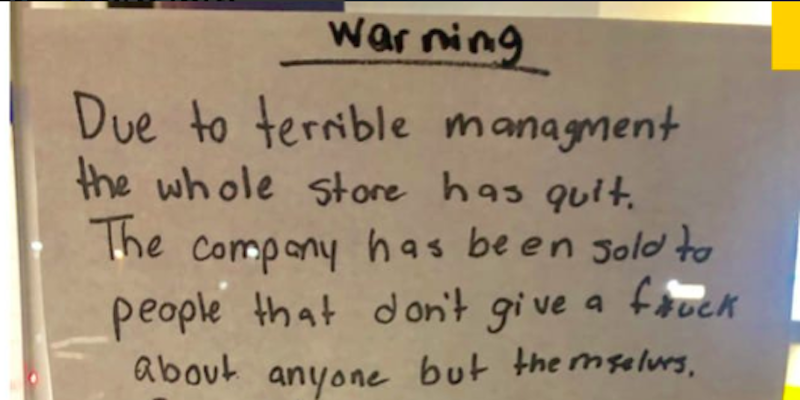 People who work a job they hate often fantasize about an epic way to quit. Dramatically make a scene? Simply never show up again? With a note about Beyoncé? The possibilities are tantalizing.

An entire staff of a Sonic in Circleville, Ohio carried out their dream on Sunday with a scathing note taped to the front door of the store.

“Warning: Due to terrible management, the whole store has quit,” the letter read. “The company has been sold to people that don’t give a fuck about anyone but themselves. Sorry for the inconvenience, but our team refuses to work for a company that treats their employees like they are shit when they have put everything into this story. We have worked too hard for too long. We are all off to bigger and better things.”

Three Sonic locations in Ohio abruptly changed ownership recently, an anonymous source told the Scioto Post. The entire staff of the two other locations also walked out over the weekend. One of which left signs saying “thank you, next” and “goodbye” hanging around the store.

The new ownership has allegedly also cut the in-restaurant workers’ pay from minimum wage to a rate of $4 per hour, plus tips. I don’t know about you, but I can’t tell you the last time I tipped a fast food worker. Carhops at Sonic sometimes skate out to deliver the food to your car, but most people don’t leave a tip for that. In order words, “TIPS. AT A FAST FOOD JOINT,” as someone bluntly pointed out on Twitter.

Sonic communications manager Kyle Lankford told MUNCHIES that employee’s pay was not slashed. “No wage rates at any level have decreased in this transition,” he said. “Of course, Sonic carhops often receive tips in addition to their wages.”

People are applauding the employees’ savage exit on Twitter.

holy shit. sucks that it happened but i fuckin love this response. i hope the new owners lose so much money https://t.co/IX2jcUuyVN

Here’s to bigger and better things for these bold workers!