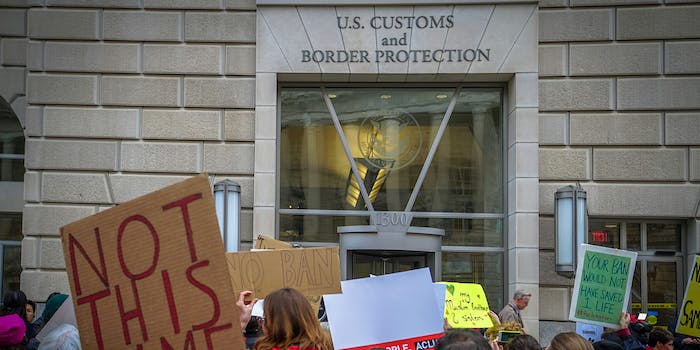 Facebook posts warning about ICE raids may be doing more harm than good.

It began as a single post in a community Facebook group for a neighborhood in Portland, Oregon.

“My friend who works in the newsroom at KBOO heard a first-hand report that ICE agents are working with TriMet in immigration-heavy neighborhoods to conduct documentation raids,” it read. “The Powell garage is being raided. Please keep your wits about you.”

The information quickly went viral, shared on Twitter and Facebook with escalating levels of certainty. (While the original poster was passing along a report heard by a friend, later iterations read, “CONFIRMED: ICE raids on public transit in deep SE Portland.”) People were freaked out, and understandably so: Immigration and Customs Enforcement partnering with TriMet, Portland’s sprawling public transportation agency, would constitute a massive breach of trust and put thousands of undocumented immigrants at risk of being apprehended in transit. This was information that needed to be spread widely and fast. So people hit “share.” Over and over and over.

But there was one small problem: It wasn’t true.

“Within 30 minutes we were able to confirm that this event did not happen,” says Kenny Macdonald, a spokesperson for TriMet. As the rumor lit up social media, damage control was swift: “We developed a short message to spread immediately through traditional media and social media denying the rumor,” says Macdonald. In addition, “our social media team responded to as many public profiles sharing the misinformation as possible.”

There's a rumor going around spreading quickly about TriMet, our fare enforcers and ICE. It is absolutely false.

ICE even released a statement of its own, calling the rumors “completely unfounded.” Meanwhile, TriMet went on to share a longer message reiterating its values of inclusivity. But for some people already nervous about their immigration status, the reassurance wasn’t enough.

“I was taking TriMet to work to help save on parking expenses,” says Pedro, 45, a contractor with projects in downtown Portland, “but I no longer take the MAX [Portland’s light rail system] because I’m afraid of ICE being on the train and stopping me just because of how I look or the color of my skin.”

Pedro has spent thousands of dollars on lawyer fees trying to get U.S. citizenship, but is still waiting on his papers. Even though the TriMet rumor was publicly debunked, like many undocumented immigrants trying to stay safe in an increasingly hostile political climate, he’s not taking any chances. “I trust the word of my friends more than the news,” he says. “ICE is everywhere.”

In the wake of President Trump’s executive orders to crack down on undocumented immigrants, social media has become an invaluable tool for communities to look out for one another and for grassroots activist movements to take shape. Facebook and Twitter can be used to instantly inform neighbors about ICE activity, organize rallies to support detained people and fractured families, and spread the word about abuses of power by federal authorities. But as the TriMet story illustrated, misinformation can spread quickly, too, stoking anxiety in immigrant communities that are already living in fear.

On Feb. 15, ICE conducted a raid at a trailer park in Las Cruces, New Mexico. Rumors spread quickly via social media and word-of-mouth that more raids were imminent, and public schools in the area saw a 60 percent increase in absences over the next two days. However, no other raids occurred.

A Facebook post claiming that ICE was planning to target Sunday church services in Kansas City went viral recently, causing widespread panic before the mayor took to Twitter to debunk it as a rumor.

“Rumors that stoke fear are not just a side effect of Trump’s anti-immigrant campaign, they’re a tool to forward it.”

In Philadelphia, organizers of the city’s annual Cinco de Mayo festival announced they were canceling the event this year amid widespread fears that ICE was planning a raid. “Everyone’s pretty much afraid because they’re saying that, basically, ICE is just going to come in out of nowhere,” a resident told a local news station. The decision to cancel the event was made to protect participants and “to raise a voice of protest” against anti-immigrant rhetoric and policies.

And in Houston and Los Angeles, police departments are seeing a drastic decline in the number of Hispanic residents reporting rape and violent crime. At a news conference this week, Houston Police Chief Art Acevedo tried to quell growing fears among residents and urged ICE to enforce immigration laws “in a manner that does not have a chilling effect on victims of violent crimes coming forward.”

Juan Rogel, executive director of Milenio, a Latinx political advocacy group, says he has heard from “a lot of people” who are missing school and work due to reports of increased ICE activity.

“Right now, people are too scared to go out and buy groceries because they don’t feel safe,” he says. “That’s a problem. We are bringing in parents to talk to educators about their fears, and we are holding workshops about knowing your rights. Our goal is building a confident community.”

For President Trump and his administration, who rose to power on a platform of xenophobia and promises to “#BUILDTHEWALL,” keeping the immigrant community on edge is key to continuing their agenda. The federal government’s seemingly chaotic and extreme actions against the Latinx community in recent months serve an important political purpose: If immigrants are too afraid to go to work and school, they are more likely remain isolated, marginalized, and disenfranchised. Rumors that stoke fear are not just a side effect of Trump’s anti-immigrant campaign, they’re a tool to forward it. In many ways, the illusion that ICE is everywhere is more powerful than ICE itself.

Wendy Pantoja, community advocate for NWDC Resistance, a grassroots movement to end deportations and support people currently detained at the Northwest Detention Center in Tacoma, Washington, acknowledges the fear is very real right now. “The discourse about immigration has many people too afraid to go to the doctor and get medical attention,” she says. “People aren’t reporting crimes because they’re afraid to go to the police. It’s affecting kids. They don’t want to go to the park. They don’t want to open the door. We are seeing mental health issues. There’s a lot of depression.”

For allies eager to help the cause however they can, clicking “share” on a Facebook post about an ICE raid seems like a simple way to do so, but immigration activists encourage more involvement, both online and off. “Don’t just say you support us, really be with us,” says Rogel. “Show up at rallies, share our events on Facebook, talk to your neighbors. We need everybody to come together and work for the same goal. Refuse to stay quiet.”

“We have to keep fighting this injustice,” adds Pantoja. “We can’t be afraid to be here.”

In most cases, it’s impossible to know the cause of false ICE reports, but the possibilities are endless, including out-of-date information, misunderstandings, incorrect assumptions, pranks, gossip, and malicious misinformation campaigns. As ICE has become more emboldened and less transparent, it’s become much harder to rule out rumors about its actions, no matter how preposterous they sound. When ICE agents are arresting Dreamers without a warrant and busting down doors to shoot legal residents “by mistake,” how do you separate fact from fiction?

HEADS UP LA!
There is an immigration checkpoint happening right now in Pico and San Pedro. Please be careful and… https://t.co/OOR63LHyUm

A common thread in rumors that gain traction is a share from a high-profile source like a celebrity, radio station, or local media personality. “One of the hardest thing for us as advocates has been to fight social media celebrities posting about [ICE activity],” says Luis Nolasco, community engagement and policy advocate for the ACLU of Southern California. “They will post about a raid or a checkpoint and people get so freaked out.” Information spreads quickly when it’s released to thousands of followers at once, and factual corrections can’t keep up. “It puts us in a tough place as advocates,” he says. “All this fear.”

When the ACLU shares information about ICE activity, which it occasionally does, Nolasco says it often comes from the direct counsel of someone in ICE custody. But “more often than not, if we’re not able to confirm [ICE activity], we don’t post it on social media.”

“We try to tell people not to share information unless you know it’s true,” Nolasco says. “For us, that means we need pictures, we need a timestamp, we need to know which agencies are involved. We need people that we know in the region to go out and investigate and talk to community members.”

Last year, Nolasco helped put together a checklist called “How to Confirm an ICE Raid” for community members to reference before posting or reposting about ICE activity on social media. The gist of it? Information is power, but only if that information is accurate. TriMet’s Macdonald agrees: “We know that people want to help do the right thing as soon as possible, but in some cases that may be waiting until a rumor is confirmed.”

While it may be helpful to know the whereabouts of ICE activity, Rogel and Nolasco both insist that knowing your rights is much more important—things like asking to see a warrant before opening the door for ICE agents, exercising your right to remain silent, and contacting your country’s consulate in the event of your arrest. And don’t go it alone. “If ICE is looking for you, seek legal counsel,” says Nolasco.

For people like Pedro, the threat of ICE looms constantly in the back of his mind, and the topic of potential raids—along with secondhand horror stories of arrests and deportations—come up constantly at work and in conversations with friends. “It makes me sad that I have to be afraid all the time,” he says. “I came here to work and I’m not a criminal. I just wanted to live a better life.”