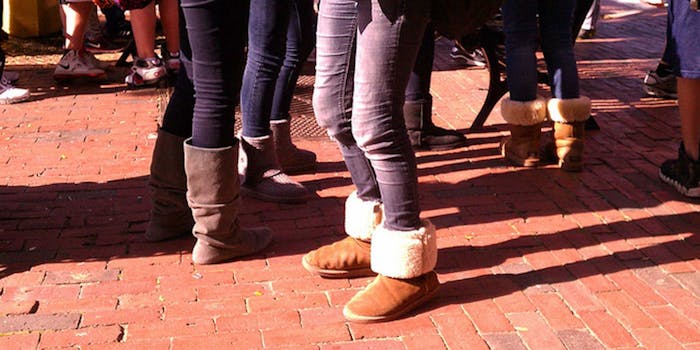 The Internet thinks your skinny jeans are trying to kill you

We shouldn't have ignored the signs.

I’ll never forget my first pair of skinny jeans. I bought them at the Urban Outfitters in the Georgetown neighborhood of Washington, DC, when I was a freshman in college and I thought I was the coolest. Little did I know, they were actually trying to kill me.

A 35-year-old woman was paralyzed because of her skinny jeans, according to the Journal of Neurology Neurosurgery & Psychiatry. She collapsed in a park the day after she had been squatting in her jeans for a “protracted time” which “had damaged muscles and nerve fibres in her legs.”

She eventually dragged herself out of the park to the road, where she flagged down a taxi and was immediately rushed to the hospital. The report says her jeans had to be cut off her swollen calves.

“Without medical treatment she may have ended up with permanent nerve damage affecting her ability to walk, and the muscle damage could have led to kidney damage but fortunately she was treated in time,” said Thomas Kimber, Associate Professor at the University of Adelaide in Australia.

But if you take a look back, you’ll see that we’ve been repeatedly warned about the impending skinny jean apocalypse.

“The nerve, in some people, is susceptible to compression,” Dr. John England, a New Orleans neurologist and a member of the American Academy of Neurology, told NBC News back in 2012 of the femoral cutaneous nerve in your thigh, which can be damaged by prolonged wearing of tight pants.

“It is a pure sensory nerve — it doesn’t go to muscles or provide strength. Anything that is tight around there could potentially compress the nerve that goes there.”

Back in 2012, Dr. Karen Boyle told ABC News that there’s a name for the floating, tingly sensation that some women were experiencing after wearing skinny jeans: meralgia paresthetica.

“The disorder occurs when one of the nerves on the outer part of the thigh compresses and pressure on in causes symptoms of tingling and numbness and pain,” she explained.

And it’s not just women who feel the burn. Men, too, have experienced nasty side effects from wearing junk-hugging denim.

An Australian study confirms that people who wear skinny jeans are at risk for nerve damage.

“The trendy denims are causing twisted testicles, bladder weakness, and even urinary tract infections,” Dr. Hilary Jones told The Telegraph back in 2012.

”I have seen several cases of men who have twisted their testicles due to wearing jeans that are far too tight,” Jones said. ”My advice would be to make sure you leave plenty of room around the groin area and that your [underwear] and trousers feel comfortable so you’re not being restricted in any way.”

That said, much like drinking booze or eating chocolate, wearing the occasional pair of tight pants probably won’t do you much harm, provided you do so in moderation. But the next time you reach for your favorite pair of painted-on jeggings, just repeat these words in your head, over and over again: Twisted. Testicles. You might be willing to suffer for fashion, but you’re probably not willing to suffer that much.