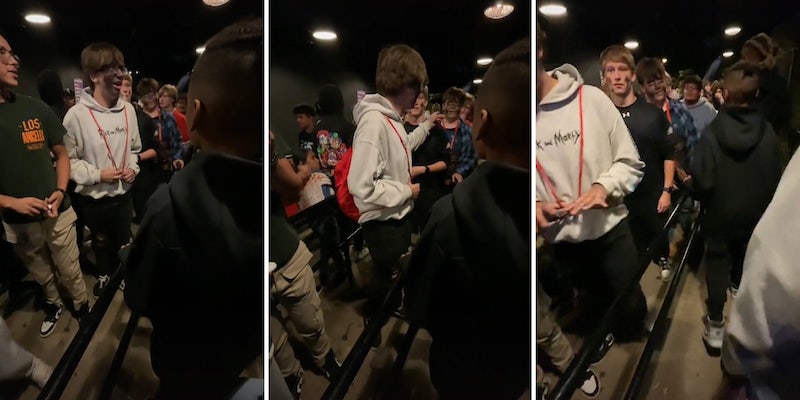 ‘He knew what he was doing’: Video of young person in alleged blackface at Six Flags draws heavy criticism

'Similar thing happened to me and my siblings when we went to Six Flags, airdropped photos and all.'

A video showing a young group of people waiting in line for a ride at Six Flags while wearing dark face paint that the poster has dubbed blackface has drawn hefty criticism on TikTok.

Posted by user Asiah (@asiahsavon), the video shows two young men wearing dark face paint while waiting in line for a ride at the theme park.

“We shouted, ‘y’all they got blackface,’ and the whole room got silent,” Asiah wrote in the comments section. “Then they tried to defend themselves and wasn’t making any sense.”

Asiah further explained in the comments that they were airdropped photos from a device named a racial slur and claimed the group directly asked them if they liked their face paint.

“We got stuff airdropped with the name ‘jigaboo jones’ when there was no other black ppl around and they asked if we like his face when they came to us,” the TikToker wrote. “And it’s just a coincidence that they only came up to us and asked if we liked it.”

Viewers quickly identified the underage person depicted wearing the face paint online via TikTok and Instagram, however, both accounts have been deleted or are otherwise no longer available.

One viewer said they had seen similar behavior on a recent trip to Six Flags.

“Similar thing happened to me and my siblings when we went to Six Flags, airdropped photos and all,” one commenter wrote. “Is it some sort of trend?”

In the video, the young person tells someone else waiting in line that his face paint was supposed to resemble a skull like their friend’s, but it was “messed up.” Some viewers pointed this out in response to the accusations of blackface or were otherwise defending him.

“He’s supposed to have a skull design like the friend he points to but said it got messed up,” one user wrote.

“People in this comment section automatically say racist how do you know he did it just to be racist,” another viewer said.

“He literally says it used to look like his friends before it got messed up,” a third claimed. “Y’all just want everyone to be racist.”

However, the vast majority of viewers interpreted the face paint as explicitly being blackface, and harshly criticized the behavior displayed in the video.

“The audacity to ask ‘you like it?’” one commenter wrote. “I would’ve beat him tf up.”

“This is so disgusting, I’m sorry you and your family had to go through that experience,” another added.

“Looked in their eyes and said, ‘you like it,'” a third user said. “I couldn’t imagine how his parents act.”

The Daily Dot reached out to Six Flags directly via email as well as to Asiah via Instagram direct message for comment regarding the video, but did not receive a response as of publication time.