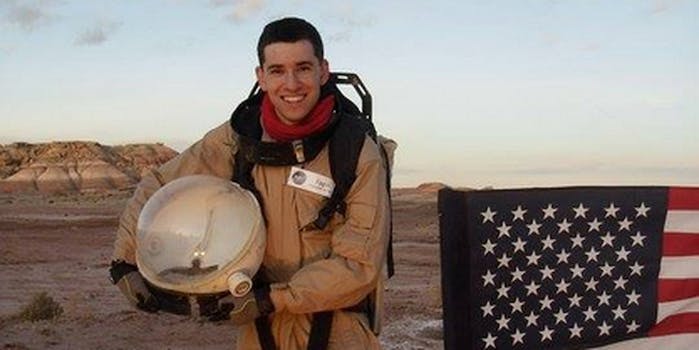 This YouTuber might become the first man to walk on Mars

Max Fagin won't stop making YouTube videos about how much he wants to travel to the red planet.

In the early days of the manned space-program, astronauts held an almost mythological position in society. Across the country, little kids—and even grown men and women—looked up to these square-jawed, crew-cutted rocket jockeys. And why not? They were the select few who possessed “the right stuff”—the steely-eyed courage necessary to harness unimaginably powerful rockets and traverse the cosmos.

Adding to the mythos was the fact that these men seemed to come out of nowhere. They were plucked from obscurity and instantly became household names. It wasn’t until years later, with books like The Right Stuff or shows like HBO’s From the Earth to the Moon that we got to draw back the curtain and see what these men were really like.

But for the next generation of astronauts, those hoping to be the first to travel to Mars, the experience will be quite different. With the democratization of space flight brought about by private companies like SpaceX, Virgin Galactic and MarsOne, many would-be astronauts have been applying publically for a shot at venturing into the great expanse.

One such applicant is Max Fagin, a graduate student who has embraced social media and online videos in pursuit of his dream of one day journeying to the red planet.

“[G]etting humans to Mars (and hopefully being one of them) has been the central aspiration of my life,” Fagin tells the Daily Dot.

For the past four years, Fagin has been posting videos online, expounding on his love of space travel and the unique talents and knowledge that make him suitable for the task. He’s posted four different video applications for SpaceX, the private rocket company started by PayPal Founder Elon Musk. He was also one of more than 200,000 people to apply for MarsOne, a non-profit endeavour that hopes to establish the first permanent human colony on Mars.

Although there was no shortage of pie-in-the-sky dreamers applying for MarsOne, Fagin distinguished himself as one of the more serious candidates. Holding triple Bachelor’s degrees in physics, astronomy and engineering, he’s now working on a masters in aerospace engineering at Purdue—the alma mater of 23 astronauts including Neil Armstrong. There, he is presently laboring on the problem of how to land a spacecraft on Mars, teaming up with other researchers to design descent and landing vehicles for future human explorers.

“I don’t know how my interest in space travel began, since it has existed for, literally, as long as I can remember,” Fagin says. “My specific fixation on Mars as a destination came when I was 12, when I read two books: Entering Space and The Case For Mars, both by Robert Zubrin, an aerospace engineer and founder of the Mars Society. In those books, Zubrin very effectively justified the position that Mars should be the main focus of humanity’s exploration of space.”

In his research position, Fagin is thrilled to be making any contribution to putting a human being on Mars. But more than that, he dreams of being on board the rocket that one day takes the first people there.

It’s a longshot for sure, but his dream may actually come true. He’s one of 705 applicants worldwide still in the running for a spot on the MarsOne mission. That puts him somewhere in the top 0.3 percent of applicants.

The MarsOne project has raised more than a few eyebrows because of its plans to send astronauts on one-way missions to Mars, starting in 2024, with no plan for how to bring them back. But that doesn’t bother Fagin, who also has the backing of his loved ones.

“My friends and family are very supportive,” he says. “After all, they have had most of my life to come to terms with my aspirations, and more importantly, they understand that it is what I want more than anything else.”

It’s not just Fagin’s friends and family who are aware of his passionate aspirations. Thanks to his YouTube channel and Facebook page, the whole world can know how badly Fagin wants to go to Mars and how far he’s willing to go to get there.

Though he’s submitted multiple video applications to SpaceX, perhaps no video is quite as daring as his first effort. To try and stick out from the other applicants, Fagin—who’s also a fan of musical theater—decided to submit a music video application set to the song “One” from A Chorus Line. (Sample lyric: “One! B.A. earned in physics / Another in astronomy.”)

“When I was applying to SpaceX for the first time, I watched several videos of people applying to the same position. And I found that all the videos were really just the same boring presentation,” Fagin says. He adds, however, “Looking back, that may have not been one of my best decisions.”

Fagin’s efforts to stand-out had mixed reviews from SpaceX, which ultimately passed on the application. Some of the employees there liked his creative energy, other’s found it unprofessional,” Fagin says. Since then, he has stuck to a “just the facts ma’am” approach to his application videos. Still, the musical application video remains Fagins most popular, with more than 8,300 views.

Just because Fagin’s no longer submitting musical applications doesn’t mean he’s done mashing-up his passions for Mars and showtunes. Look to further than “Standing on Mars,” his take on the song “Stars” from Les Misérables.

For the time being, Fagin is still plugging away at his dream. He’s currently working for a start-up at NASA’s Ames Research Center helping to design a 3D printer for the International Space Station. And as soon as he has his master’s, he plans to apply for the astronaut corp as well.

“I have an application to the U.S. Astronaut corps sitting on my computer,” he said. “I’ve held off on submitting it for the last decade since no civilian astronaut has ever been hired by NASA who didn’t have at least a master’s degree. But on the day I earn my master’s from Purdue, I plan to submit the application.

“After that, it will just be a race to see who will say yes to me first: SpaceX, NASA or MarsOne.”