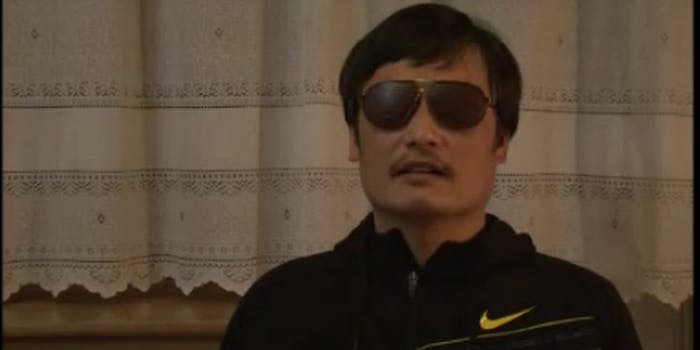 Sina Weibo, the Chinese equivalent of Twitter, is using its most subtle censorship technique yet to squelch news of dissident Chen Guangcheng's escape.

Scandals in China are coming fast and furious these days, and Sina Weibo has been scrambling to keep its censorship up to pace.

Now China’s most popular Twitter-like blogging service has a new weapon in its censorship arsenal. Dubbed “search smothering” by the China-based writer who first reported on the technique, it’s a far gentler and yet potentially far more insidious way to control speech.

Rather than blocking or deleting certain key words or phrases, the service simply hides them from search results after a certain point in time. Weibo users can still post updates using the phrases, but they won’t appear in search results. To the average Weibo user, it won’t appear that anything is amiss.

Beijing-based blogger and Tech in Asia reporter Charles Custer had been following the method for about a month, but recent events gave him an opportunity to test it out. Last week, blind dissident Chen Guangcheng escaped from house arrest in the Eastern city of Linyi, fleeing to the U.S. Embassy in Beijing.

After talks between high ranking state officials, including Secretary of State Hillary Clinton, Chen was released yesterday. While Western media has widely reported the event, China’s official mouthpiece, Xinhua, published just a single statement that condemned the United States and note that Chen had “left of his own volition.” (The Telegraph reported earlier today that Chen left after Chinese officials threatened his family.)

While Xinhua was willing to write about the event, the government clearly doesn’t want anyone talking about it.

Custer tracked “left of his own volition” as it popped up in the few hours following Chen’s arrest. Sure enough, about an hour later any posts that used the word disappeared from search results, though all of the earlier posts remained. If you were to believe Sina Weibo’s search algorithm, the entire country stopped using the phrase at exactly 4:41 PM.

There are always ways to skirt the censors, however.

Custer said he found one post that  that used a traditional Chinese character—the type used in Hong Kong and Taiwan—instead of the simplified characters used in the mainland. But don’t expect that trick to work for long. Pretty soon, discussion of Chen Guangcheng’s release will need the Teletubby treatment if it’s to remain uncensored.