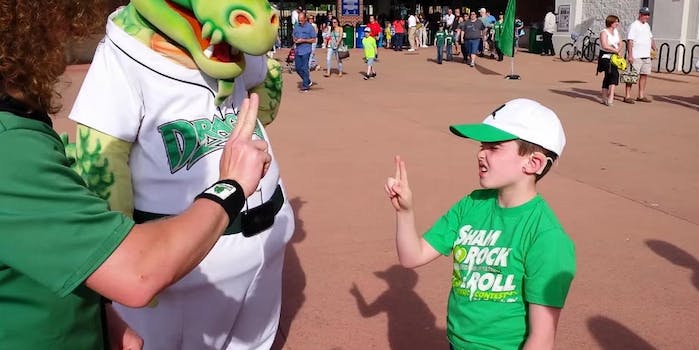 Baseball mascot has a pleasant surprise for a young deaf fan

On May 24 Hunter Samworth attended a baseball game in Dayton, Ohio, that he'll never forget.

Hunter Samworth did more than just snack on peanuts and Crackerjacks at a recent Class A minor league baseball game—he made an unexpected friend.

While outside the stadium for the Dayton Dragons in Ohio on May 24, Samworth, 7, and his parents came across the team’s oversized mascot named Heater. Samworth, who is deaf and has cochlear implants, began to ask his parents using sign language if he could interact with Heater.

“My wife told him in sign, ‘Tell Heater it’s nice to meet you,’” Samworth’s father Matt told TODAY.com. “So he walks up to Heater and signs that to him, and next thing you know, Heater signs back and just starts signing to him.”

The touching moment was captured on video, which has since collected more than 32,000 views.

The woman accompanying Heater was a professional sign language interpreter who is teaching the man inside the suit how to sign.

In the United States, about two or three out of every 1,000 children are born deaf or hard-of-hearing, according to the National Institute on Deafness and Other Communication Disorders (NIDCD). By 2010, about 25,500 children had received cochlear implants, a small device “that can help to provide a sense of sound to a person who is profoundly deaf or severely hard-of-hearing,” the NIDCD added.