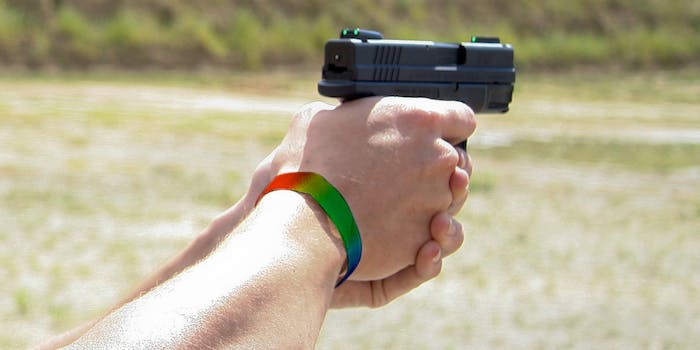 Conservatives ask LGBT people to arm themselves and #ShootBack

On Thursday, residents of the Los Angeles gayborhood in West Hollywood were shocked to discover streets covered in rainbow posters emblazoned with the slogan #ShootBack.

Only a few days had passed since the Orlando mass shooting at the gay bar Pulse, which took 49 lives and severely injured dozens more. The Pulse massacre fell on the same weekend as West Hollywood’s annual pride celebration, and much of the festival took place under a newly subdued, mournful tone—not only due to the Orlando shooting, but also because police had apprehended a heavily-armed man on his way to the West Hollywood Pride parade.

Calling for LGBT people to arm themselves with guns, the posters were an LGBT-themed variation on the Gadsen flag—the “Don’t tread on me” icon traditionally associated with the Libertarian and Tea Party political sects.

In an exclusive interview with conservative blog PJ Media, controversial street artist Sabo took credit for the #ShootBack posters—while also claiming they were a “group effort” that “came out of the gay community.”

Sabo’s previous statements in interviews have revealed him to be a somewhat LGBT-tolerant conservative, such as this December 2015 excerpt from a chat with LA Weekly.

“I’m Republican but only because there’s not much of an option,” Sabo told LA Weekly. “I’d probably be better off saying I’m Libertarian, but they’ll never get elected. I don’t care who you marry, I don’t care about gay people, I’m not a bigot — I’m socially liberal but I like to keep government as small as possible.”

But Sabo’s previous LGBT-themed artwork has been incendiary to say the least: One T-shirt line read “Muhammad is a Homo,” while another project proclaimed that “Fag is the New N**ger.”

The flag could have also been inspired by the rainbow Gadsen flag that appeared behind ultra-conservative and openly gay man Milo Yiannopoulos at his Orlando press conference Wednesday.

The sentiment began to spread online on Friday, with conservative supporters tweeting the #ShootBack message and LGBT Twitter users reacting to the concept in both negative and laudatory ways.

#ShootBack is absolutely the wrong message after the massacre in Orlando. https://t.co/dyGumo2bSQ

When the posters appeared in West Hollywood, locals appeared largely put off. West Hollywood Mayor Lauren Meister told the Los Angeles Times that it was the wrong message.

“We are disturbed by them,” Meister said. “We don’t believe in an eye for an eye, and we advocate against gun violence.”

Many of the signs appeared outside popular local gay bar the Abbey in the days following the city’s weekend pride celebration. The owner of the bar, David Cooley, also told the Los Angeles Times that he disagreed with the #ShootBack message.

“The best way to shoot back is to enact serious change to our gun policy,” said Cooley. “We need an outright ban on all assault weapons and better protections to keep all guns away from bad people.”

While there is a pro-gun presence in the LGBT community, mostly channeled through the national network of LGBT gun clubs Pink Pistols, the community response in the days after the Orlando massacre leans heavily toward efforts to increase gun control and restrictions.