Because talking to teens is hard enough.

Parents have a hard enough time talking to their children about topics they understand, such as sex and chores. Consequently, when it comes to addressing things like social media judgement, Caitlyn Jenner’s transition, and microaggressions, parents often don’t know where to start.

SheKnows, a popular lifestyle site for women, has launched a series of videos titled #HatchKids, designed to help parents and children discuss complicated topics. The videos are made by children and, according to the site, are designed to “represent their unique perspectives.”

The latest video in the series tackles social media judgment. The video has teens repeat a 2014 study out of Oregon State University that found that young women who post revealing photos on social media are judged as less competent than their peers.

In the video, teens are asked to look a photo of a young woman in a bikini and then another of a smiling woman who has just finished a race. When it is revealed that the two are the same person, the teens are astonished.

They then begin to explain why they judge people who post sexy pictures on social media. And, in most cases, they seem to be arguing for not posting revealing photos at all. “I think you have to think about who is following you and how you want them to see you,” says one teen.

Another rethinks her judgement. “It makes me really think about what a photo actually means for who a person is,” says another. 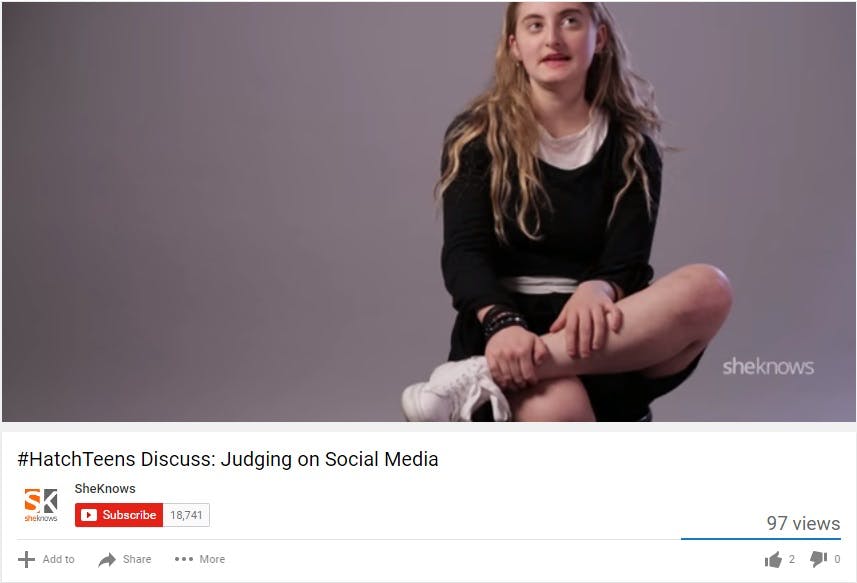 The hashtag at the end of the video encourages teens and parents to #StopJudgingStartTalking.

Jennifer Denton, vice president of corporate programs at SheKnows, spoke with the Daily Dot and said that the idea for the videos arose from the SheKnows community. The filmmaker “is very liberal,” she said, “and has a great relationship with her daughter. And at age 14, her daughter started posting super provocative photos online and it was a battle in their household about freedom of expression. And the daughter really believed that this was a feminist movement and that she should be allowed to have freedom of expression.”

The conversation, Denton says, is “sticky.” Denton herself is a mother of teens and notes, “You want to have an open and honest dialogue with your kids about how they are presenting yourself online, but you don’t want to be shaming or judgmental.”

The video seems to advise that teens jump to judgment, but that is not what Denton says SheKnows is advising. “This workshop and Hatch video were designed to help parents start a conversation with their kids about personal online representation and social media’s impact on one’s public-facing persona.”

And to that end, the video is very effective, if not for teens, but as an avenue for parents to begin these important discussions.

Denton also advises that as parents approach the video, they can provide their children with four main takeaways:

In the Jenner video, the kids widely accept the reality star the way she sees herself. “Who she wants to be is who she should be,” said one girl who doesn’t look older than 9.

When an adult reads the children a few quotes from people criticizing Jenner, the children’s mouths hang open in shock. “I think they are just afraid of change,” says one boy. “I think they just want everything to stay the same because they don’t know how to handle it.”

The incisive comments from the children are shocking for any parent who is used to mostly fart noises and requests for fruit snacks emanating from their offspring. But their reactions prove that children have an infinite capacity to handle all that the world has to teach them.