The YouTuber has since apologized to Lahren via Twitter.

YouTuber Shane Dawson alleges he was ejected from a military event hosted by Tomi Lahren because he was holding hands with his boyfriend.

According to tweets by Dawson from Monday night, the YouTuber was attending a “military event” with his boyfriend, Ryland Adams, a host for the YouTube channel ClevverTV, when the incident occurred. The event was called Remind the Nation, a series of events designed to share the stories of veterans.

The event was also in connection with Sundance Film Festival, though it is unclear if it was an official Sundance event. Zero Films Productions, one of the organizations showcasing work at Remind the Nation, wrote on their Facebook page that their film, Stacked Deck: Journey of a Skytrooper, was being showcased at the film festival, and images and videos of the event allege it took place at Sundance, though the festival’s printable schedule doesn’t list the title nor the event.

Per Dawson’s tweets, he and Adams were ejected from the event for holding hands, though Dawson says in a video taken at the event that he was on “the list” to attend. Dawson is publicly bisexual, which he announced in a coming out video in 2015. 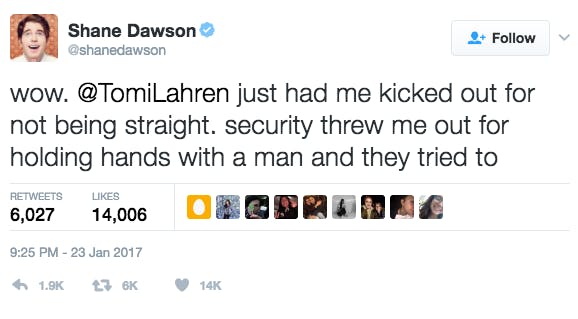 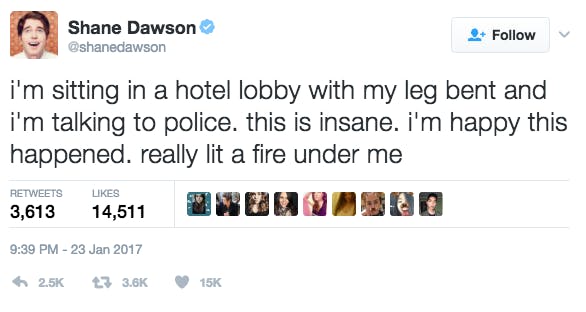 Initially, Dawson accused Lahren of having made the decision to have him and Adams denied entry, but he later rescinded the accusation, apologized to Lahren via Twitter, and deleted his tweets.

. @RemindTheNation just kicked me out of their party for holding Shane's hand. I CAN NOT BELIEVE THIS STILL EXISTS IN OUR WORLD @TomiLahren

i'm sorry for deleting all of this. i'm overwhelmed and i need to process this. love u guys. please love each other. ❤

i wanna make videos that make people laugh. i don't want to be apart of this kind of stuff. it just happened. i'm sorry guys

i'm not trying to be dramatic and i don't use that to get views. i make content i'm proud of and i don't talk about this stuff.

tonight something intense happened & it opened my eyes to a lot. but i'm not trying to "drag" or hurt someone else even if (cont)

(cont) if i don't agree with them. i never want to be that person. i just want people to like me. this has all just been a lot. :(

tweeting hate only makes more hate and i'm sorry that i @replied someone when i was upset. that's gross and i hate that.

but i am really sad about what happened & at some point i need to explain everything. but right now i'm overwhelmed.but i'm ok. thanks guys❤

.@TomiLahren u may have had nothing to do with what security did to me tonight & i really don't want to cause a thing. i'm sorry for (cont)

@TomiLahren (2/2) bringing your name into this. i was just really sad & shocked. i don't want to cause a thing. i hate it. love and peace.

@_bethanynicolex @TomiLahren i know. but to put blame on someone that was speaking there is wrong. it was the security that was the problem.

Lahren denied Dawson’s initial story via Facebook, alleging a completely different version in which Dawson and Adams disrupted the event. According to Lahren, Dawson and Adams asked for a picture with her, then jumped in front of her during the photo and kissed each other.

Since Dawson shared his story fans have tweeted with the hashtags #IStandWithShane and #TomiLahrenIsOverParty in solidarity of the YouTube star, despite his retracted allegations against Lahren.

dont care if you like him or not, he deserves basic human rights like the rest of us. this happened &i'm actually disgusted #IStandWithShane pic.twitter.com/KW1ursc0i9

#TomiLahrenisoverparty imagine kicking 2 guys in love out of a party cause you're so miserable pic.twitter.com/ntLeJQVrtH

“Anyone who knows me knows I am a social moderate and have always welcomed the LGBT community to my show. The dialogue has always been open to you as it is to anyone I may disagree with or differ from,” Lahren wrote in her statement. “It’s sad you didn’t take the opportunity to engage in a meaningful conversation but rather tried to disrupt and derail an event for veterans and service members.”

Keep going with your fake news. Have fun.

Very sad Shane would mislead his large and passionate following. You have a voice and impact. Why would you lie? Disappointing.

Representation for Dawson, Adams, and Remind the Nation have not returned requests for comment. Lahren’s representatives directed the Daily Dot to her Facebook statement. Officers with the police department of Park City, Utah, the city in which Sundance is held, and the encompassing Summit County told the Daily Dot that no reports involving someone by Dawson’s name have been filed.

Interestingly, on her show yesterday, Lahren came out against the “social experiment” in the military.

Update 9:15am CT, Jan. 25: In a statement to the Daily Dot, Jillian Barker, co-producer of the Remind the Nation event, said Dawson and Adams weren’t on the list for the event and weren’t removed for their sexual orientations.

“Yes, Tomi Lahren hosted our event. Although, she was not involved nor the reason for Shane Dawson and his group of friends being removed from the event. They were simply not on the list, and in NO WAY were removed because of sexual orientation or because Shane was holding hands with his boyfriend. As the co-producer of the event, I personally took the time to ensure Shane was [okay], additionally bringing in paramedics to check on his physical state. He politely declined such assistance.”

Correction: This headline has been updated.