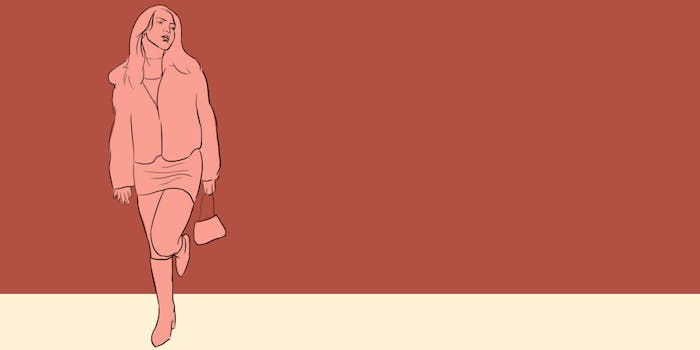 When Zola went viral, it gave all sex workers a direly-needed teachable moment.

On Wednesday, the Internet stopped whatever else it was doing and read the Zola story.

Zola, the nickname of a young Hooters waitress and former exotic dancer from Detroit named Aziah King, had tweeted a mind-blowing, engaging, contemporary true crime tale in the form of 150 back-to-back tweets. By now, most people are familiar with #Zola and the story in which two young women travel to Florida for a strip trip that turns into a sex trafficking nightmare—complete with murder, kidnapping, and suicide attempts.

Today, King is adjusting to her newfound fame. On Wednesday, she had a couple thousand followers on Twitter. By Friday morning, that number was up to 86,000 and included shoutouts from the likes of  Selma director Ava DuVernay and Missy Elliot.

But something else is happening in response to the Zola story, too: sex workers and advocates who work with victims of sex trafficking are speaking out about the reality behind the tale. King’s story may or may not be completely true: she hasn’t confirmed, only tweeting that it was “based on a true story.” Regardless, the story reads as truth, especially to the thousands of sex workers and trafficking victims who have had experiences identical to those described by King. And the way that the story is being received—as titillating entertainment, as “hoetry” from the hood, as humor—is a problem for people who know all too well that being pimped and kidnapped is no joke.

On the sex worker blog Tits And Sass Thursday, a writer bluntly stated that “every sex worker has a horror story.” She shared one of her own: a memory of being roofied by a customer that ended with being carried off the strip club stage and puking in the dressing room. It was one of many stories that “blur the line between awful and hilarious,” she wrote, but also the kind of story that sex workers tend to tell with a hefty added dose of “manufactured humor” rather than simply admitting that they’d survived a potential attempt on their life. Why?

“God forbid I admit that a few times in my career I’ve been terrified, that I’ve been hurt,” wrote Josephine in the Tits And Sass response to the Zola story. “Stories with those kinds of truths immediately get weaponized against sex workers. So, shit happens.”

The truth of the matter, for so many in the sex industry, is that there are morality police and anti-trafficking wingnuts waiting around every corner, waiting for you to crumble and admit that working in the sex industry is hard and scary and that you want out. As Josephine wrote, God forbid that you admit it’s a tough business, because that will just blast fuel into the flamethrowers of everyone who wants to see your business completely eradicated from the face of the earth—namely, the anti-prostitution crusaders who desperately need to paint all sex workers as victims of hulking pimps and sleazy rapist customers. In hiding from the morality police, sex workers often feel the need to brush off the bad and highlight the good: It’s all funny, it’s all fine, we’re tough, we have entertaining stories to tell. Now will you leave us alone and let us work?

If the Zola story did nothing else, it gave other sex workers a moment of relief. People were laughing at “the life” for once, instead of encroaching on it with pitchforks, torches and abolitionist soapboxes. It also gave a sort of popularity platform, for just a moment, to those who have worked in the industry and were able to use the viral spotlight to come out all over again and remind the world that there are a whole lot of talented and intelligent people in the biz.

Most notably, comedian Margaret Cho pivoted the moment towards her own history as a sex worker. And honey, it was fierce.

I stand for women of color because I am one. I stand for sex workers because I was one. Who the fuck are you?

Sex work is simply work. For me it was honest work. I was a sex worker when I was young. It was hard but well paid. There's no shame in it.

It's hard work that's not protected by law enforcement or unions. It's unfair. We have the right to our bodies +work https://t.co/wcvQm07spI

As Cho made good use of the platform, sex workers roundly chimed in to congratulate and thank her for being out and for providing a role model for life after the sex industry as well.

@margaretcho Tbh my job at Walmart was 500 times more degrading than sex work. I pay my bills by celebrating my sexuality. That's beautiful.

I always loved @margaretcho for the "Ass Master" routine but now I love her for what she's saying about sex work.

Like Cho, out sex worker and journalist Tara Burns, in a Thursday response piece for Ravishly, decided that the Zola story is a teachable moment. For Burns, Zola’s funny and relatable tale of two girls “vibing over our hoeism or whatever” is exactly what sex trafficking looks like. It’s not children being pushed into vans and locked up in underground brothels—it’s people who were usually already working in the sex industry, who happened to meet some pimp that would alternate between taking their money and beating up shitty boyfriends for them. It’s other sex workers helping them make ads to post online. It’s traveling across state lines with the intention of making more money. It’s having a guy who drives you to appointments.

Burns—herself a survivor of child sex trafficking at the hands of a parent—states that real trafficking is so different from the dark nightmare seen on TV that no one actually recognizes it in the Zola story. Because trafficking, in the day-to-day, can be so much more mundane and unintentional than most people can imagine.

“Sex trafficking happened when Jessica lied and told her they were just going to dance and the guy was just her roommate (fraud in recruitment),” wrote Burns, clarifying the ways that law enforcement handles cases like Zola’s and Jess’s every day. “Women like Zola have been charged with conspiracy to traffick just for posting ads on the Internet.”

Pimping and sex trafficking are obviously not fun and games. While Burns points out the necessity of clarifying the ways that trafficking definitions are applied to victims themselves, advocates for victims also used the Zola story to point out just how common the uglier aspects of the story actually are.

Melody Wilbrecht, a case worker for commercially sexually exploited children in an Oregon division devoted to sex trafficking victims, posted a sharply-worded response on Facebook after seeing jokes about Zola popping up in her feed all week:

“I hear these stories on a regular basis but I also see the outcomes of the people involved. While someone might tell a story with an air of dark humor, they experience intense psychological trauma that affects them for the rest of their lives. Its great that people can have humor in their telling of a traumatic story but the fact remains that it’s still real life. They were most likely not laughing when they saw someone get shot in the face and while they claim to not have been a victim themself (sic), they didn’t magically learn how to sell another person online without prior exploitation.”

That is exactly why the viral Zola story is so important: it provides a much-needed reality check about “trap” girls and “the life” (trapping, in street lingo, means hooking, and “the life” is often used to describe the sex industry from the inside). Zola is funny, smart, beautiful, and constantly on the verge of losing control of the sheer chaos taking place around her. She has the talent and charm to somehow weave a horrible nightmare into a lighthearted piece of entertainment even as the story’s leading characters (again, if real) are very likely going to spend years in therapy recovering from the violence of that trip to Florida. It’s that complicated, vivid reality—not blanket victimization or heroics—that defines life for most sex workers.