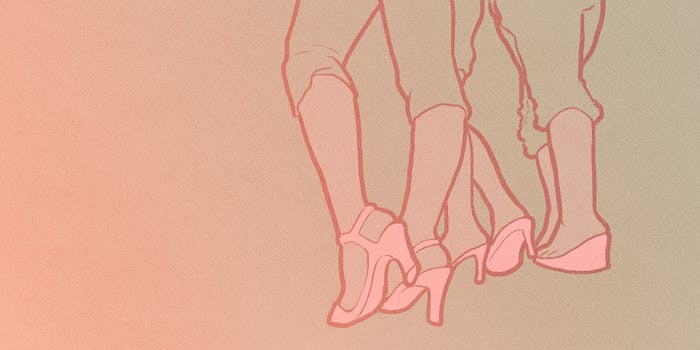 Sex workers want to talk to you about parenting

As it turns out, sometimes being a sex worker can make you a better parent.

Everyone has an opinion on sex workers. Victims or businesspeople? Exploited or empowered? Through all the noise of opinion over Amnesty International’s vote in support of decriminalization, it can be hard to remember that there’s one group of people who truly know what they’re talking about: sex workers themselves.

A newly formed collective is working to spotlight the intersection of parenting and sex work with a blog and forthcoming book called Red Umbrella Babies.

The collective behind the project represents a diverse overview of the people who make up the sex-worker community: women and men of all races, transgender people, and a range from working-class sex workers to high-end call girls. The thing they all have common? Most of them have kids.

The sex workers behind Red Umbrella Babies are still gathering submissions for the anthology they hope to publish next year, but in the meantime, they are already challenging the media to provide fairer representation of sex workers as parents. For example, when NPR’s Terry Gross aired a July 21 interview with sex worker turned film star Mya Taylor (Tangerine), Gross introduced the show with a content warning, saying, “Before I go any further you should know that parts of our conversation will be about sex workers and may not be appropriate for children.”

In response, Red Umbrella Babies collective member PJ Starr wrote a letter to NPR, stating that such parental warnings are stigmatizing to the children of sex workers and also perpetuate a stereotype that sex workers are inherently unsafe around children.

Starr also filmed a video response to those who opposed the Amnesty International decision. The video features a sex worker named J who tells opponents of decriminalization, in no uncertain terms, to “mind your own fucking business.”

I spoke to two other collective members about the unique struggles and joys of parenting while working in the sex industry. Kini Seawright and Juliana Piccillo come from different worlds, but they’re united by the Red Umbrella Babies project.

Seawright is a black ex-inmate who was sentenced to three years in prison after stealing $125 worth of baby formula. She started the Seawright Prison Justice Project after her 26-year-old son was murdered, also in prison. The anthology project is the first time Seawright has worked as an editor, which she called “challenging and exciting.”

“People who work 9-5 jobs, who are exhausted and can’t necessarily afford all the things for their kids, don’t want to hear about how easy and joyful it can be to parent as a sex worker.”

She also pointed out that doing sex work can actually provide a lot of parents with the time and freedom they need to be there for their children. “You have the daytime with your kids because you usually work at night when they’re in bed,” Seawright said. “You have time to make them dinner, to be there for them when they get out of school and help them with their homework.”

One other (rare) thing that Seawright and Piccillo have in common: both are publicly “out” as sex workers who have kids. Of this, Seawright says she’s “not really concerned [with] what people think.”

Piccillo is a white mother of two, a filmmaker (I Was a Teenage Prostitute), and a former journalist who wrote for the Associated Press. She’s currently completing another documentary (Whores on Film) about the depiction of sex workers in Hollywood films. But her public-facing persona as a sex worker didn’t come without a price.

“Every sex worker I know who’s a parent and has gone through a divorce or separation has had their ex try to use that to take the kids away,” Piccillo said over the phone. She said her second husband used her job in a bid to try and get full custody of her children. “He did surveillance and submitted a dossier to the police department and our custody judge, not just to have my custody taken away but to have me put in jail.”

A lot of sex workers have been through the horror of custody battles, said Piccillo, whether with ex-partners, courts, or child protective services—all primarily because of their jobs.

“You go to court and you’re fighting for custody of your child, and they’re throwing around half naked pictures of you from your website. It’s irrelevant to your parenting of your child, and you have to stand there and defend yourself to this judge.”

Whoremom blogger Tanaha Koontz is just one former sex worker who lost her kids in a Florida court battle. On the blog, she writes about being pushed into prostitution by her jobless and abusive husband, who then used prostitution to successfully argue for full custody. During the multiyear struggle of trying to get her kids back, Koontz has been raising money for a documentary about sex workers who lose child custody because of their jobs.

Through talking to members of the Red Umbrella Babies collective, it becomes painfully clear that, when it comes to being trusted around children, there are strong parallels between sex workers and LGBT people. Until recently, openly gay men were banned from being leaders in the Boy Scouts and a long-held stereotype painted LGBT folks as “sexual deviants” who are unsafe around children.

But losing custody isn’t the only danger to the children of sex workers. With laws across the U.S. criminalizing prostitution, parents are frequently separated from their children by virtue of arrest and imprisonment. Seawright recalled seeing a lot of women in prison for sex-work charges and most were women of color. “I think they’re wrongfully convicted by going to jail,” said Seawright. “They haven’t broke no laws by me. That’s their body to do what they want with it.”

But it would be inaccurate to claim that all sex worker parents are constantly suffering and afraid. The truth is, according to Piccillo, many are better off because of the financial stability, flexible schedules, and accessibility to their children that working in the industry affords. When the collective began reading the essays submitted for the Red Umbrella Babies anthology, they encountered a few that told stories of desperate single moms who found their way into sex work. But, Piccillo explained, they saw more stories about how doing sex work transformed parents’ lives—and the lives of their children—for the better.

“We see people talking about how well [sex work] worked for them as a single parent: This let my kid study abroad or get horseback riding lessons, this allowed me to afford therapy for myself which is important as a single mom. A lot of the stories talk about how great parenting was as a sex worker,” Piccillo said.

Of course, not every sex worker in the anthology or in the movement for sex workers’ rights is happy with their work. Some have been exploited, criminalized, separated from their kids. But just as many, it seems, wanted to express the relief—and the opportunity—that sex work brought to their lives.

The issue of how to present sex work to a mainstream audience is complicated, Piccillo said. After decades of stigma and criminalization, and myths about all sex workers being drug addicts with no self-esteem, someone had to put forth the image of the “happy hooker with a Ph. D.” just to balance out the negativity. But stereotypes persist, and Piccillo had some thoughts on what might be at the root of anti-sex worker discrimination.

Jealousy may be a factor, given that many sex workers—depending on economic status and the market—can make more money in far fewer hours than peers with minimum wage or even middle- and higher-income jobs. “People who work 9-5 jobs, who are exhausted and can’t necessarily afford all the things for their kids, don’t necessarily want to hear about how easy and joyful it can be to parent as a sex worker,” Piccillo said. “I was able to provide for my kids and be with them all the time, so I was happy about it.”

Gender roles and even gender discrimination can also be at the root of people’s concerns about sex workers. Women are believed to make up the vast majority of sex workers—and women making good money on their own terms might just be too much for some people. “Part of what people don’t like is that we’re not playing by the rules. And we’re getting rewarded for breaking those rules,” said Piccillo. “And people don’t like seeing women in particular make so much money when we aren’t marrying some schmuck and cooking him pork chops. People much prefer stories where we’re suffering.”