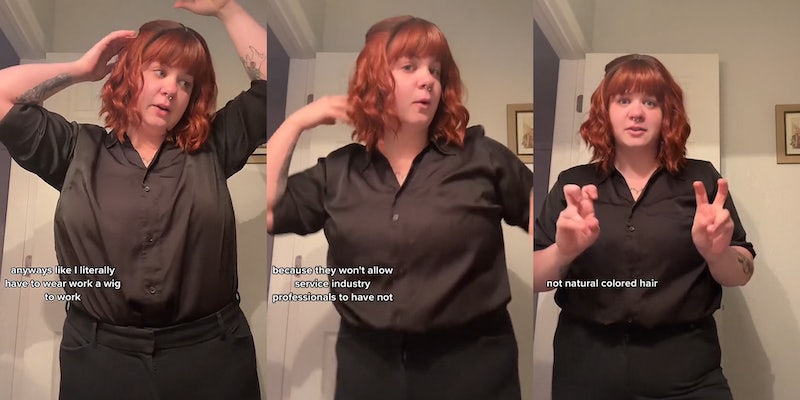 ‘I’ve just been prepared to quit on the spot’: Server says they have to wear a wig to work because restaurant won’t allow ‘unnatural’ hair colors

'No amount of base pay makes the bullsh*t worth it, I’m not going to lie.'

A TikToker’s frustration with having to wear a wig to work because of their employer’s policy over hair color has left them ready to quit on the spot.

“Will today be the day? Stay tuned,” TikTok user Kade Drum (@kvde.pdf) captioned their post which was uploaded to the social media platform on Oct. 3.

In the clip, Kade is getting ready for their shift in their bathroom. “I’m in a super annoying situation with my work right now,” they say as they fix their hair, which is a reddish-brown colored wig, styled in a shoulder-length bob with bangs.

Kade goes on to explain that they can’t get into too much detail because of the establishment’s strict social media policies but that work has been so bad as of late that they’ve been having panic attacks before their shifts. “Every day I’ve been going to work recently I’ve just been prepared to quit on the spot,” Kade says.

The TikToker admits that they’re so miserable that they’re prepared to quit despite not having another job lined up. They also go on to detail instances that have been difficult for them, but their main qualm is the fact that they “literally have to wear…a wig to work because they won’t allow service industry professionals to have not natural colored hair.”

Kade, whose real hair is dyed bright orange, is referring to the establishment’s policy that doesn’t allow its workers to have hair colors other than black, brown, blonde, and red, which are naturally-occurring colors.

“I always said I’d never work in a restaurant that had that policy but…my base rate is $11 an hour as a server,” Kade says, bringing up an important reason many workers stay in jobs that they hate.

According to the Department of Labor, Florida’s minimum wage for tipped employees is $10, but employers are allowed to pay less if the hourly wage combined with tips received equals the federal minimum wage. This means that many employers can end up paying around $2.13 an hour as a base rate. But as Kade explains, their wage is significantly higher, which is a huge reason they feel trapped by their current job despite having to wear a wig.

“Like I can’t even front like that is just too fucking good to leave behind,” they say of their pay rate. But even with higher-than-average pay, Kade says, “I could always justify walking out because I fucking hate people.”

“I just can’t even,” they say as they end the video. In the comments, viewers backed up the TikToker.

“I quit my restaurant job last night! I feel you,” one user said, to which Kade replied saying, “Hell yeah! Congratulations friend.”

One user suggested Kade “be careful they might see,” referring to their employers seeing their posts online. However, Kade’s frustration over the company’s policy about hair color, their unreasonable shift hours, and their bosses seemed to have reached a boiling point. Kade responded, “At this point let em lmfao.”

This isn’t the first instance of someone on TikTok exposing an employer for their policies regarding hair and physical appearance in general. Several users shared their own stories of being miserable and underpaid at their own jobs.

“I make less than min wage INCLUDING tips some days. I hate it and I hate getting up in the morning cuz of it,” said one person.

“Must be nice for 11 an hour im getting paid 2.13 hourly lollll,” said another. Kade replied, “No amount of base pay makes the bullshit worth it I’m not going to lie.”

However, the majority of comments were simply complimenting Kade’s fake hair, with some even suggesting they dye their real hair the color of the wig.

“Where’s the wig from?” one person asked, echoing the question on many people’s minds. “Amazon!” Kade replied. “I just made a video about it :)”

The Daily Dot reached out to Kade via TikTok comment.