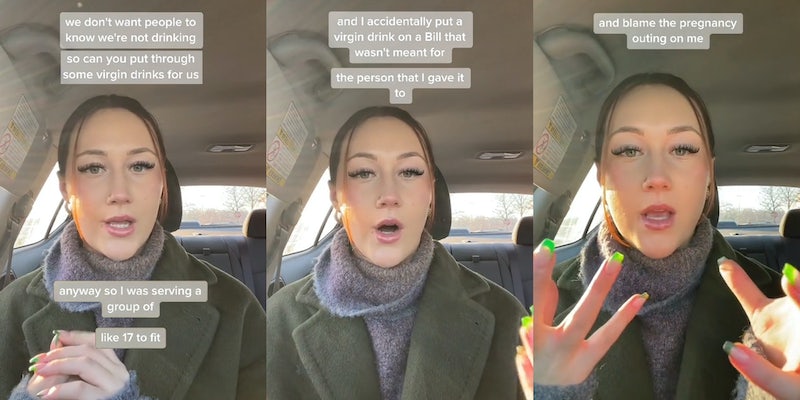 ‘Babe that’s a lot to unload on your server’: Server says customer lashed out at her for ‘ruining her pregnancy announcement’

'The whole entire table knows that she's pregnant because you gave someone the wrong bill.'

In a viral video, a server requested advice from other “customer service industry girlies” about an interaction with a large table the night prior, during which a customer lashed out at her for placing a virgin drink on the wrong tab.

The user, Brooke Steinschifter (@brooke.steins), asked viewers whether or not the customers were justified to blame her for “ruining her pregnancy.”  The video has received over 468,500 views.

“Babe that’s a lot to unload on your server but like I am sorry,” the caption reads.

@brooke.steins babe thats a lot to unload on your server but like i am sorry🥲🥲🥲🥲 #customerservice #karen #serverlife #karentok #restaurant ♬ original sound – Brooke Steinschifter

In the clip, Steinschifter explains that she was serving a large group of about 15 to 17 people. After taking their drink orders and about halfway through their meal, two women came over to Steinschifter and asked to be served virgin drinks “on the down low” because they didn’t want others to know they weren’t drinking, she says.

“So I naturally assumed that they were pregnant or one of them was pregnant, and they’re just, like, not wanting people to know yet or whatever,” she claims.

Steinschifter says that prior to the interaction, the table was nice and cooperative but regardless, it was a busy night, and the table was splitting bottles of wine and had multiple drink orders. When it comes to splitting bills, the creator explains that it can get confusing even after asking the customers what they had.

“When I was splitting their bill, I slipped up and I accidentally put a virgin drink on a bill that wasn’t meant for the person that I gave it to,” she says.

The customer gave the bill back to Steinschifter who said she must have punched it in wrong. As she was walking away, she heard someone ask who was drinking virgin.

As Steinschifter was talking to her manager, she says one of the women walked over to both of them.

“Yeah, so I just wanted to let you know that my friend is absolutely so upset, because you were so unprofessional about the entire pregnancy thing,” Steinschifter claims the woman told her. “And now the whole entire table knows that she’s pregnant because you gave someone the wrong bill.’”

The woman didn’t want anything comped, according to Steinschifter, she just “came over to grill [her] and blame the pregnancy outing on me.”

“I’m just so upset and I need to know if I’m in the right or wrong,” Steinschifter asks viewers at the end of the clip.

In the comments section, users reaffirmed Steinschifter that she didn’t do anything wrong.

“Deffs not your fault. They go out drinking with their friends is their own risk of getting caught,” one user said.

“HOW WERE YOU SUPPOSED TO KNOW SHE WAS PREGNANT ur not a mind reader. They blew it out of proportion,” another commented.

“Bartender and server here: they could’ve played that off any other way. You were smooth [as f*ck]. Also been in a similar situation,” a third user shared.

The Daily Dot reached out to Steinschifter via TikTok comment.