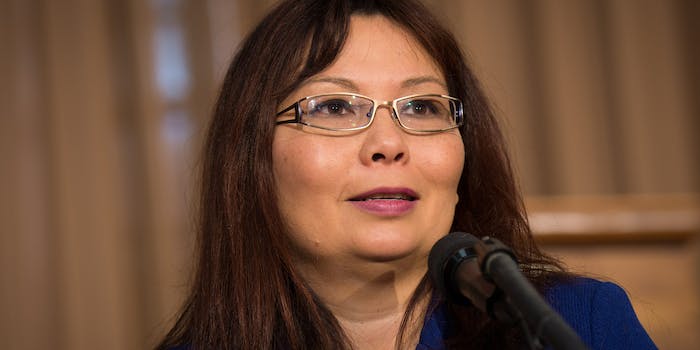 Some senators fear 'Senate decorum' is at stake with Sen. Duckworth's resolution.

Sen. Tammy Duckworth (D-Ill.) recently became the first senator to give birth while in office. She also wanted bring her newborn daughter into the Senate during voting periods. Now, thanks to her own proposal, the Senate unanimously voted on Wednesday to end a ban on babies within the chamber.

However, some Republican men aren’t happy with the idea.

Hatch in particular argued that he had “no problem” with the idea, yet he seemed concerned over logistically implementing it.

“But what if there are 10 babies on the floor of the Senate?” he asked, the Chicago Tribune reports.

“We could only wish we had 10 babies on the floor,” Klobuchar fired back. “That would be a delight.”

The internet has since criticized Hatch for his hesitation, pointing out that caring for newborns is a natural part of life that can’t necessarily be interrupted just for “Senate decorum.” And besides, if more babies were in the Senate chamber, that means younger senators (particularly young mothers) are most likely entering the legislative body, which means more representation for American women, parents, and young voters in their 20s and 30s.

Someone please buy that baby a onesie with a giant middle finger on it and position her right in front of Orrin Hatch on the Senate floor. https://t.co/YDKrUYof0a

Regarding @SenDuckworth able to bring baby to the floor, Sen. Orrin Hatch: “But what if there are 10 babies on the floor of the Senate?"
Old men just don't get it because they think women should be at home with the kids. Obama saw it the way most Americans see it. pic.twitter.com/GMtC2EvLYF

If there are 10 babies on the floor of the senate it constitutes a Baby Quorum and they can form their own Baby Senate. https://t.co/pFn73Ncasb

It would be sweet justice if Orrin Hatch's seat is filled by a very accomplished woman. Oh, hey look who's running: @JennyWilsonUT https://t.co/acSsVJEdYx

Eventually, Hatch’s office turned to Twitter, admitting that 10 babies in the Senate “would be a wonderful thing.”

It would be a wonderful thing. Senator Hatch supported the change.

In better news, Duckworth also worded the proposal with gender-neutral terminology. That means gay male senators have room to take care of their children in the Senate chamber as well, assuring LGBTQ families aren’t left out from the change.

I love the idea of one half of a Male same sex couple bringing their new born to the Senate. Or maybe both are senators.

Ten babies would mean 10 more young mothers or fathers in the Senate, which would be a good thing.

Senators who are new mothers or fathers shouldn’t have to choose between caring for infants and performing their Constitutional duty. Glad the Senate passed @SenDuckworth’s resolution. Maile Pearl, welcome to the world—and welcome to the United States Senate. https://t.co/6q5SmzfLBf

Some senators don’t understand the fuss at all and believe there were already children on the Senate floor before the proposal passed.

“Why would I object to it?” Sen. Marco Rubio (R-Fla.) quipped, the Tribune reports. “We have plenty of babies on the floor.”

If Rubio is any indicator, there’s some truth to that claim.