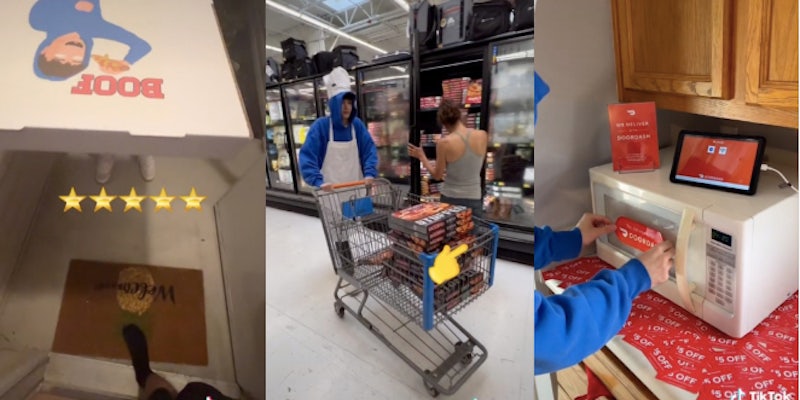 ‘This man is living in the future’: Man buys frozen pizzas from Walmart and sells them on DoorDash. He gets 5-star reviews

'All fun and games until the health inspector shows up.'

Update 3:45pm CT, Sept. 8: A DoorDash spokesperson told the Daily Dot in a statement that “Boof Pizza has never been active on DoorDash, as this appears to be a social media prank.”

“However, virtual restaurants are permitted on our platform and they must operate in accordance with local health and safety regulations, while also adhering to DoorDash’s standard operating procedures which include several food safety and food handling requirements. We remove restaurants operating out of a residential address, unless they can demonstrate compliance operations under local applicable laws,” the spokesperson added.

Original story: A TikToker says he is selling frozen pizzas from Walmart on DoorDash in a now-viral TikTok, sparking debate in the comments.

In the video posted by TikToker Caden (@cadenboof) on Sept. 5, he shows the process of starting his own “restaurant,” Boof Pizza, that sells frozen pizzas on DoorDash out of his kitchen.

“I ordered a bunch of pizza boxes with our logo on them because we have to look professional. Then I went to Walmart to buy all the frozen pizzas,” Caden says.

He then shows a clip of a woman “yelling” at him to “stop” because he was buying the frozen DiGiorno pizzas in bulk from the frozen section of Walmart.

“I went home and set up a few things on the tablet that DoorDash sent me, and our restaurant was live,” Caden continues.

In the next clip, he shows himself standing outside of Domino’s to “steal some” of his “competitors'” customers.

“We started getting orders fast, but the DoorDash drivers were mad about how long it was taking,” Caden explains. “But somehow at the end of it all, everyone left five-star reviews on the pizza, so I guess it worked.”

The video has amassed over 551,000 views as of Sept. 7, with users debating the legality of his restaurant in the comments.

“It do be illegal though. It’s a type of trademark infringement,” one commenter suggested.

“This is either a joke/clout chasing or he can LITERALLY get sued,” another wrote.

“All fun and games until the health inspector shows up,” a third added.

However, others applauded Caden for his “genius” side hustle.

“This man is living in the future,” a commenter wrote.

“This man is a genius. I like the pizza cover and art it look so cool and I would buy a pizza from you,” another said.

In an email to the Daily Dot, Caden clarified that he “did the video mainly as a joke but also to show people that ghost kitchens are a thing on the rise many people haven’t heard of.”

Ghost kitchens refer to food establishments where the food is consumed off the premises and has no public presence, dining room, servers, etc. They are perfectly legal, but there are still concerns about regulating food safety.

“Because of the virtual nature of ghost kitchens, consumers cannot access health inspection letter grades as readily as they could at traditional restaurants, which may be required to display proof of inspection in their storefronts or dining areas,” according to The Regulatory Review.

The Daily Dot reached out to DoorDash via email.