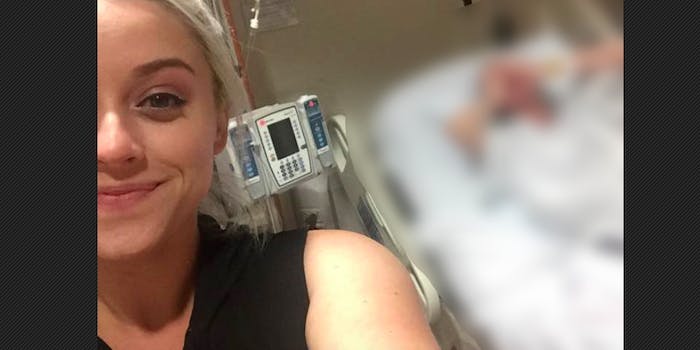 Sisters, can't live with them, can't take a selfie without them.

New Aunt Kat Armendariz’s selfie game was on another level when she snapped a picture of herself with her sister in the delivery room. On paper, the idea might sound sweet: two sisters together, an intimate moment before the baby arrives. Except her sister was about to give birth when the photo was taken.

Except her sister was about to give birth when the photo was taken.

SELFIE! While my sister is about to shove a baby out her vag!

Armendariz, mother of five, looked calm and collected while her sister seemed to be screaming in agony. She captioned the photo “SELFIE! While my sister is about to shove a baby out her vag!”

While the caption may have been fun and playful, the severe look of pain on her sister’s face resulted in a backlash toward the selfie, which has garnered nearly 500K views since Armedariz uploaded it to Imgur on July 2.

In the comment section, users voiced their anger over Armedariz taking the spotlight on her sister’s big day while portraying her sibling in an unflattering light. Armedariz responded to the accusation in an interview with Mashable: “She wasn’t in too much pain at first, so she thought it was pretty funny. I told her I was going to do it, she just started the oxytocin and the labor pains began almost instantly. She started to feel it and right when she was like, ‘Oh my god I can’t take this,’ I took the photo.”

Sisters, can’t live with them, can’t take a selfie without them.