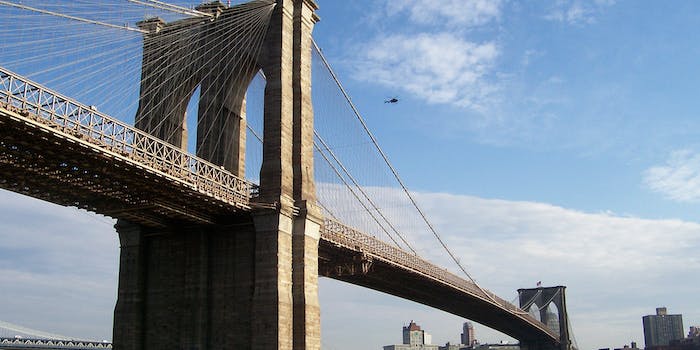 We just want to know how many "likes" it got.

Whether it’s the aftermath of a car wreck or a WorldStarHipHop fight, the human instinct to rubberneck is almost impossible to curtail. Smartphones have given us a way to document and even place ourselves in relation to these and similar tragedies. Case in point: the cold-blooded mystery blonde who took a selfie that captured a would-be bridge jumper in the background.

Police were ultimately able to talk the man down to safety, but not before photographer Paul Martinka snapped a photo of the woman as she snagged a souvenir of the attempted suicide. She did not give her name when asked and quickly left Brooklyn Bridge Park, where she had been standing with other onlookers, so we can’t be sure how the picture came out—though it certainly looks as though she’s trying to get the jumper in frame with her slight smile.

There’s a little hypocrisy, of course, in a tabloid like the New York Post then ginning up furor over her heartless actions when they have no problem slapping a photo of imminent death on their front page. Then there’s the knowledge that they were there to document the suicide themselves, with plans to push the story on social media (which is also where that selfie was liable to wind up). That brings us to an interesting question in journalistic ethics: Does including your own face in a shot render an otherwise objective medium exploitative?

Other people must have been taking pictures, but somehow, by not interpolating their heads between the lens and the scene on the bridge, they maintain the moral high ground. It’s often a fine line to walk, as we saw in the divided reaction to the student who took a selfie that showed his pregnant teacher having labor contractions behind him. Would a photo of just the teacher have been less controversial? Would a photo of the Hindenburg disaster with a reporter’s face in one corner be more iconic than the image we find on Wikipedia?

Perhaps, in a perfect world, an observer would never become a part of the story they wish to tell, but as the rise of the selfie and all its attendant headaches makes plain, it’s in our nature to get involved.