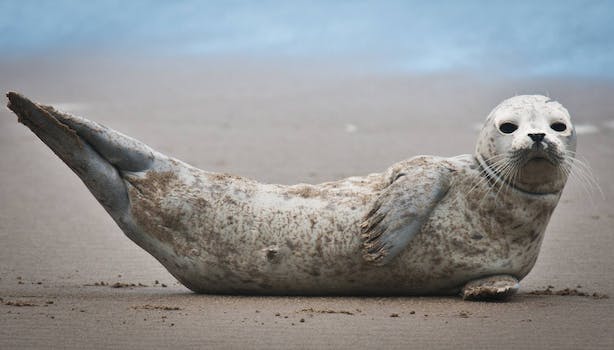 It's sad that a government agency has had to warn people about this, but here we are.

The National Oceanic and Atmospheric Administration wants you to stop taking selfies with baby seals.

Noting that interactions with humans could endanger a seal pup’s growth and even life, the agency advised humans to stay at least 150 feet away from them at all times.

“When you get too close to a wild animal, you risk stressing or threatening it,” NOAA said, “and stressed animals are much more likely to act unpredictably.”

Based on a quick scan of Twitter, this was a badly needed warning.

This is why I love @jakemiller "Sealfie" get it. It's a selfie with a seal. pic.twitter.com/FkLGtShl2G

I feel my #SealSelfie surpasses my #GoatSelfie. I called this one Sydney – Sydney the Seal. pic.twitter.com/YgYX8zqSPM

“It is normal for a mother seal to leave her young pup alone on the beach for up to 24 hours while she feeds,” NOAA said. “If she sees you near her pup, she may not think it’s safe to come back. It might only take a few seconds for you to snap the photo, but the mother may abandon her pup if she feels threatened.”

Seal selfies can also get you arrested. Harassing a wild animal is illegal, and getting close enough to a seal to take a selfie is likely to cause it enough harm to qualify the contact as harassment.

To biologist Andrew David Thatcher, the selfie is just a stand-in for a broader behavioral failure on the part of humanity.

“Pretending it’s technology that drives crowds to drag an ailing dolphin out of the surf and pass it around like a trophy,” he wrote, “fundamentally misses something important about human behavior and refocuses conservation conversations on trivialities like cracking wise about selfie-sticks [sic] rather than addressing clear and critical knowledge gaps.”

Seals don’t care whether or not you have a camera, and even if you’re not taking a selfie, that’s no excuse to approach a pup. If you want a photo with a seal, let it be on the seal’s terms—because that beautiful creature might just jump into your photo anyway.

my dad sent me this pic of him and said the seal got in the way of his selfie.. 😂😂 pic.twitter.com/iGKz7GsJbX