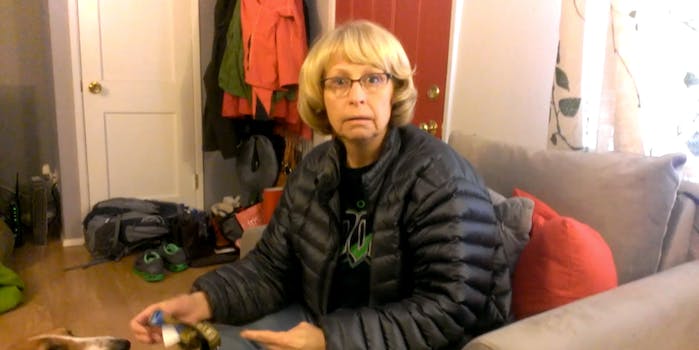 A diehard Seattle Seahawks fan just got the surprise of a lifetime.

A diehard Seattle Seahawks fan just got the surprise of a lifetime.

Mike Harris’s mom has been rooting for the Seahawks since 1976, and has witnessed many of the team’s best and worst moments over the years. She missed the chance to see them after they beat the Miami Dolphins in 1983 because she was pregnant with Harris, but she’s seen other games over the years, including the 2005 run to the Super Bowl.

When the Seahawks made it to the Super Bowl this year, she wanted to see her team play in Rutherford, N.J., but the prices were too high. Harris wanted to make sure his mom got to see the biggest game of her life.

After hearing about the ticket prices dropping, Harris looked for tickets online and found they were fairly reasonable. Soon, his best friend’s wife got in on the scheme and got him a ticket as well. Getting the flight and hotel room just fell into place.

“Thirty years after she skipped their welcome home for my sake, I was able to return the favor in the biggest way I could ever think of,” Harris wrote in the video description. “I’m excited to see the game, but there was nothing more meaningful than to see my mom’s reaction that I’ve shared in the video.”

It went about as well as surprising the dad who’s an Alabama fan with BCS National Championship game tickets. Even non-sports fans can appreciate the sheer joy in getting your parents the one thing they’ve always wanted.