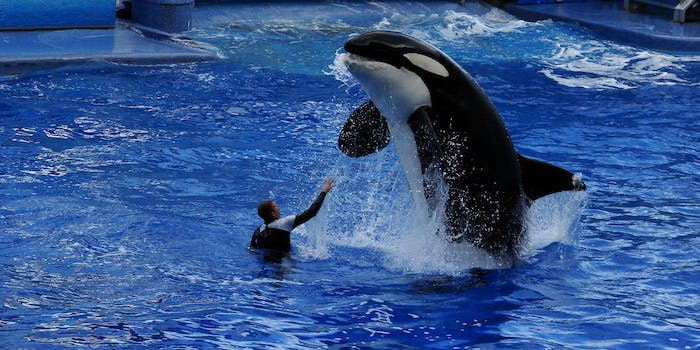 PETA labels the news 'a payoff for future generations of orcas.'

The hashtag #SeaWorld is trending after the water park chain announced today that it will no longer breed orcas (better known as killer whales). Florida-based SeaWorld, which has three locations in the U.S., has come under fire in recent years for its treatment of the animals it keeps.

In an op-ed for the Los Angeles Times, SeaWorld CEO Joel Manby writes: “For some time, SeaWorld has faced a paradox. Customers visit our marine parks, in part, to watch orcas. But a growing number of people don’t think orcas belong in human care.”

As a result of attitude shifts and even proposed legislation to outlaw keeping orca whales captive, Manby said that “[t]his year we will end all orca breeding programs—and because SeaWorld hasn’t collected an orca from the wild in almost four decades, this will be the last generation of orcas in SeaWorld’s care. We are also phasing out our theatrical orca whale shows.”

Watch our announcement and read how SeaWorld is changing here: https://t.co/Oe1xv2sFUGhttps://t.co/0Ke3pcw6UV

There are 23 killer whales in captivity in the U.S. — all are at a #SeaWorld: https://t.co/XdkjaH4NXP pic.twitter.com/u7bl1SgC4D

(3/4) Orcas are highly intelligent and social animals. I strongly believe this is the right thing to do. #SeaWorld

The 2013 documentary Blackfish was highly critical of SeaWorld for its treatment of orcas, especially Tilikum, a performing orca kept at SeaWorld’s flagship park in Orlando, Florida, for three decades. Tilikum has killed three people, which critics of SeaWorld’s practices attribute to psychosis from being kept in unnaturally cramped conditions.

Despite the misleading name “killer whale,” there are very few documented cases of orcas killing humans in the wild. SeaWorld dismissed Blackfish as “propaganda” which it said used “false and emotionally manipulative sequences” to advance the beliefs of animal rights activists.

The news of the breeding ban comes just over a week after the park announced that Tilikum is suffering from an incurable bacterial infection.

A former SeaWorld trainer, John Hargrove, wrote an exposé of the park in his 2015 memoir Beneath the Surface: Killer Whales, SeaWorld and the Truth Beyond Blackfish. SeaWorld rebutted Hargrove’s stories of orcas being driven by cramped conditions to turn on their trainers, mother whales and their calves howling with distress as they were separated from each other, and orcas suffering sunburn from inadequate shade. However, as the Guardian reports, the damage from negative publicity had already been done: The park operator saw an 84 percent drop in profits during 2014-15.

PETA welcomed today’s news in a statement from its president Ingrid E. Newkirk, who said: “SeaWorld has taken a step forward, but more must follow. For decades, orcas, dolphins, beluga whales, seals and many other animals have suffered in confinement at SeaWorld, and to do right by them now, SeaWorld must open its tanks to ocean sanctuaries so that these long-suffering animals can finally have some semblance of a life outside prison tanks.”

However, Manby addressed this in his op-ed, writing that sea creatures raised in captivity will likely die if released into the ocean. “No orca or dolphin born under human care has ever survived release into the wild. … For as long as they live, the orcas at SeaWorld will stay in our parks.”