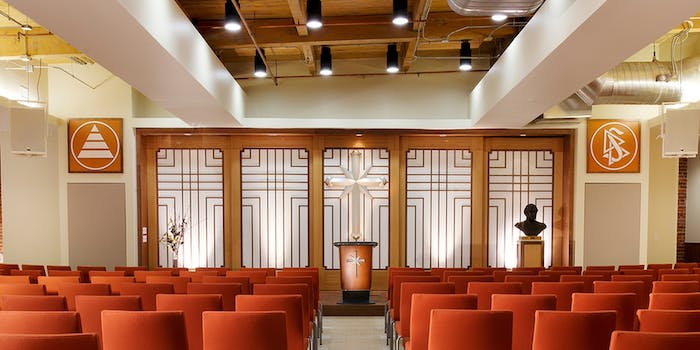 The secret to Scientology’s recruitment on Craigslist

The next time you’re hunting for a new roommate or just a nicer couch, keep your wits about you.

People wash up at Craigslist looking for all kinds of stuff: jobs, apartments, sex, love. But all anyone visiting the website really needs, as far as a few ardent believers are concerned, is to join the Church of Scientology.

A Scientology recruiter, in fact, had such such success drawing new members to his mission through Craigslist—enough to annoy Anonymous, as it turns out—that he or she drew up a handy memo about best practices when it comes to “Cyber Dissemination Club.” (“‘Cyber’ means ‘using computers’ in this context,” the author helpfully informs us.)

The document, titled “Craigslist Hat Write-up”—“hat” being Scientology slang for a specific job within the organization, or as in this case, the instructions particular to a given church task—walks a newcomer through Craigslist’s mechanics and then demonstrates how nearly any subsection, from “groups” and “classes” to “politics” and “household services,” can serve as a launching point for the Scientology pitch. There are some tips for properly saturating the site without getting flagged, too.

The author of the memo claims to have sold a great many people on Dianetics courses with ads as varied as “Class for Dealing with Breakup or Divorce,” “Seminar for Stress and Depression,” and a “Lovers of Wisdom” activity group. When people call or email in reply, they’re told they need an L. Ron Hubbard book or an appointment with a Scientology officiant. But even so, Craigslist posters are warned about giving too much away: “Do NOT explain Dianetics or Scientology over the phone,” the guide stresses.

More importantly, it is crucial to pinpoint the customer’s “ruin,” i.e., “the one thing in his life he will pay almost anything to overcome.” Once that issue is identified, it’s a simple matter of convincing the recruit that their problem is one that Scientology can effectively treat.

While some ads, like “Free DVD: Scientology, an Overview” are fairly straightforward about the intention of distributing Dianetics materials, many others bear no sign of Hubbard’s imprint: a “Free Consultation for Local Singles,” to take one example, was deliberately vague:

How long has it been since you had a relationship?

Do you feel there is anything you would like to improve about yourself or about your situation in life in order for you to get into a good relationship?

You need to do a specific kind of personality test, which will show you what you need to improve about yourself to help you start a successful romantic relationship.

For a limited time we are doing free testing and consultation for singles. Call (916) 925-2545 to take advantage of this offer.

Another listing, with the headline “Reach your potential as an artist” omitted even a mention of the personality test.

Are you a creative person who is running into blocks?

Do you feel limited in your creative ability?

Whether it’s writing, composing, painting, acting, dancing, anything, you run into barriers. Find out how to get rid of them. You are a powerful arists and you can reach your full potential.

Posts about self-help lectures and “reading partners” similarly obscured their true intentions, with casual references to a “non-profit organization,” meaning the Religious Technology Center (RTC), a body that controls the various trademarks of Dianetics and Scientology. “We are a non-profit group composed of people who are interested in life improvement, becoming happier, and more successful in life,” reads an ad under the heading “Let go of your past and make new positive friends.”

Where the author really cuts loose, though, is in the political discussion forums: Here Hubbard’s somewhat justified suspicion of the U.S. government, as well as his crippling paranoia about the field of psychiatry, are parrotted to grandiose effect. Readers are informed about the corruption of the country’s mental health system, conspiracy theories are spun around big pharma, and supporters of “universal human rights” are urged to visit a website for Youth for Human Rights International—another group established and overwhelmingly staffed by Scientologists.

This is not merely a commercial technique, either; it has a scriptural significance as well. In large type at the head of the document is a quote so badly worded it can only be Hubbard’s: “On the principle that if you don’t communicate you aren’t, it behooves us as an organization, if we are to exist in the public consciousness, to put out communication particles.” In other words, spreading one’s ideas around is almost as good as finding people to accept them.

The church’s genius has always been to attract converts with a wide array of promises and through as many channels as possible, and to all appearances, Craigslist happens to be perfectly engineered toward that strategy. The author claims that each of his featured sample ads has gotten at least one response. So the next time you’re hunting for a new roommate or just a nicer couch, keep your wits about you: Before you know it, you might be an Operating Thetan.