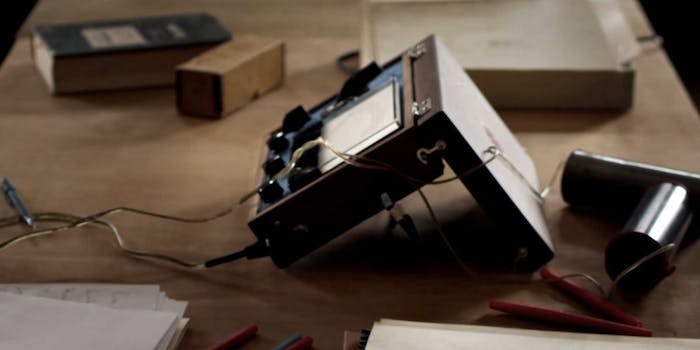 Filmmaker Alex Gibney could have made a whole miniseries with this stuff.

Going Clear, HBO’s scathing documentary on the Church of Scientology, debuted Sunday night to much fanfare, some of which resulted from the Church’s aggressive campaign against it. But while the religion’s leaders have every reason to fear what the ex-Scientologists in the documentary have to say, the film doesn’t stray too far from their personal stories.

At a recent screening, director Alex Gibney said this focus was necessary in order to produce a standalone feature, even though he had virtually unlimited material with which to work. Here, then, are some of the craziest Scientology stories that didn’t make it into Going Clear.

Gibney’s film covers the tsunami of lawsuits that the Church of Scientology, under leader David Miscavige, filed against the IRS in the early 1990s when the bureau was trying to collect a fortune in back taxes. But the group has always been at odds with the federal government.

In 1979, several members of the Church were convicted for their role in Operation Snow White, the biggest security breach in the history of the U.S. government. Some 5,000 Scientologists infiltrated, wiretapped, and stole documents from over 100 agencies and embassies in 30 different countries, all with the aim of purging material that criticized the religion and its founder, L. Ron Hubbard, who was named by prosecutors as an “unindicted co-conspirator” and went into hiding for the rest of his life.

The investigation sparked by Operation Snow White exposed other Scientology plots, including one that targeted author Paulette Cooper, who in 1971 published a book called The Scandal of Scientology.

After suing her repeatedly, digging up dirt on her sex life, and even attempting to frame her for a bomb threat, the Church’s Guardian’s Office—now the Office of Special Affairs, a legal department that functions like an internal intelligence agency—sought “[t]o get P.C. incarcerated in a mental institution or jail, or at least to hit her so hard that she drops her attacks.”

Operation Freakout would have involved impersonating Cooper in a series of threats against Arab consulates, Henry Kissinger, and Gerald Ford. The plan was never put into effect, though the Church did pay Cooper a settlement out of court after the FBI turned up evidence of it.

3) The Death of Lisa McPherson

In 1995, a Scientologist named Lisa McPherson was involved in a car accident and afterward appeared to be in psychotic distress. She was briefly held at a hospital but refused evaluation, insisting she be allowed to return with fellow Scientologists to the church’s headquarters in Clearwater, Fla., where she spent the next 17 days under “isolation watch.”

On December 5, McPherson died of a pulmonary embolism. Medical examiner Joan Wood listed the cause of death as “undetermined,” noting that McPherson had been deprived of fluids for several days, was comatose, suffered roach bites, and died slowly. The church was charged with two felonies—“abuse and/or neglect of a disabled adult” and “practicing medicine without a license”—but in 2000, Wood revised her findings, calling the death an “accident.”

According to the church’s own logs, McPherson had been force-fed, seemed to have a measles-like infection, and was prescribed medication by a doctor who didn’t examine her. The church settled a wrongful death lawsuit brought by her family out of court in 2004.

4) The Mystery of Shelly Miscavige

David Miscavige and his wife Shelly both grew up as Scientologists; they met as teenagers in Sea Org, the church’s private navy and paramilitary force. For years, Shelly played a prominent role there, overseeing the auditing of actress Penélope Cruz when she was dating the church’s biggest celebrity, Tom Cruise, and later allegedly arranging Cruise’s relationship with another actress, Katie Holmes.

Since 2007, however, Shelly Miscavige has no public appearances, and the LAPD has fielded two missing persons reports that name her. They say they met with Shelly in 2013 and have dismissed both reports as “unfounded.” Still, speculation has swirled for years that she made organizational decisions that enraged her husband and is now in “The Hole,” a facility at the church’s Gold Base in Gilman Hot Springs, Calif., where top-level members are known to have been confined in degrading conditions for perceived failures, disloyalty, or sabotage.

Church executives have refused to reveal Shelly Miscavige’s whereabouts and have said that she “devotes her time to the work of the Church of Scientology.”

Hubbard’s detoxification program, known as the “Purification Rundown,” is meant to both rehabilitate drug users and alleviate radiation sickness. Encompassing exercise, dietary supplements, and prolonged periods in saunas—as well as niacin, which can cause everything from liver damage to gout in large doses—it’s one of the first services offered to new adherents.

The Purification Rundown has also killed a few people. In 1995, six years after Dr. James Kenney of the National Council Against Health Fraud condemned the system as “unproven” and dangerous, two Italian participants died, one of kidney failure, the other of a heart attack. A 25-year-old Oregon man died of liver failure; the church settled with the parents out of court. Journalist Mark Ebner described yet another harrowing case in a 1996 issue of Spy:

“Well, I got routed onto the Purification,” explains Marge. “I have never done drugs in my life, yet I was on the Purif for almost five months. It was a nightmare beyond my wildest imagination.” During her time on the Purification Rundown (“sweating out toxins” in a sauna), Marge suffered panic attacks, dizziness, and nausea. One day, she was found blue-lipped on the waiting room floor, hemorrhaging. Instead of taking her blood pressure or calling an ambulance or even a doctor, they explained away her bleeding as “restimulation” from radiation she had absorbed from ultrasound testing she’d had years before. They attributed her panic to “a really bad event” she went through “a long time ago.” She was remanded to the program, and when she finally snuck off to a noncult doctor, she was diagnosed with heatstroke and anemia.

After the Sept. 11, 2001, terrorist attacks, Tom Cruise co-founded the New York Rescue Workers Detoxification Project, an initiative that received public funding for the purpose of administering the Purification Rundown to emergency responders and other public-sector employees suffering respiratory problems as a result of the attacks. Critics argued that it was all a front for recruitment and that “several firefighters not only joined Scientology but left their families” in the process.

“They told the firefighters that they’d been unhappy in their lives before 9/11 and that they should leave,” a FDNY higher-up said at one point. “Cruise is responsible.”