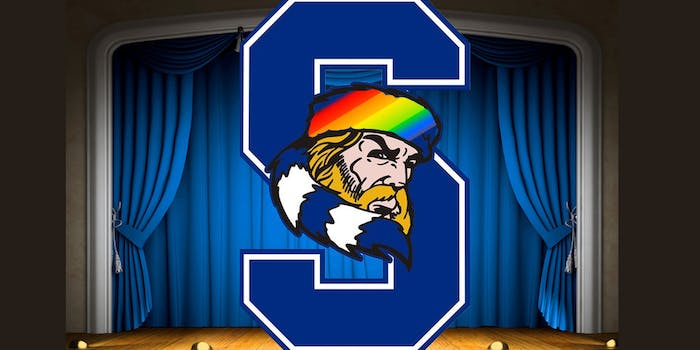 These school admins canceled ‘Spamalot’ because it was too gay, then lied about it

School officials in the small town of South Williamsport, Pa., are finding it hard to look on the bright side of life.

In May, Pennsylvania became one of 19 U.S. states to allow real-life gay marriage. But one local Pennsylvanian school district hasn’t quite mustered up the courage to allow it onstage.

School officials in the small town of South Williamsport, Pa., are finding it hard to look on the bright side of life after they canceled the high school musical production of Spamalot, and then lied about their homophobic reasons for doing so.

“I am not comfortable with Spamalot and its homosexual themes,” Principal Jesse Smith wrote to the local drama teacher when he canceled a teen-friendly performance of the hit Monty Python musical over its gay content.

But after the drama teacher went public, the school superintendent swooped in to deny Smith’s statements had ever been made.

“In that email, Burch says the principal wrote that homosexuality does not exist in a conservative community such as South Williamsport. We spoke with community and students who go to the school. They say that’s not true.”

Smith’s alleged comments about homosexuality not existing in his small-town environment raised more than a few eyebrows among the Internet denizens who saw the story. Reddit predictably had a field day.

But WNEP retracted the comments two days later, after district superintendent Mark Stamm insisted to the South Williamsport Sun-Gazette that the WNEP report was untrue.

“The high school principal did not make the comment that was attributed to him by the WNEP-TV reporter,” Stamm said.

Stamm went on to claim that the musical was never approved to begin with because of general concerns about its content and suitability for junior high and high school students. (The Sun-Gazette website is currently offline; a cached version of the article is available here.) Though the Broadway version of Spamalot is risqué, schools use a teen-friendly version that has already been edited for content. The musical contains no explicit scenes of gay romance but does include a gay wedding.

Stamm’s denials didn’t manage to convince everyone, however. Among them is producer and arts advocate Howard Sherman, former executive director of the American Theatre Wing. Last month, Sherman filed a request for access to the school’s internal communications about the issue through Pennsylvania’s Right To Know Law.

After first asking for an extension, the school finally responded last week. And as Sherman notes on his blog, the school superintendent hadn’t exactly told the truth about why Principal Smith had canceled Spamalot.

Sherman reports that Smith first objected to the musical’s “gay wedding” on June 15 in an email to Burch. Then, in an email sent to Burch two days before WNEP’s news report, Smith lays out his reasoning:

I am not comfortable with Spamalot and its homosexual themes for two main reasons:

1. Drama productions are supposed to be community events. They are supposed to be performances that families can attend. To me, this kind of material makes it very hard for this to take place. I don’t want families to be afraid of bringing small kids because of the content. I don’t want members of the community staying home because they feel the material is too risqué or controversial.

2. I think that choosing productions with this type of material or productions that may be deemed controversial put students in a tough spot. [sic] I don’t want students to have to choose between their own personal beliefs and whether or not to take part in a production.”

Despite the superintendent’s denial that Smith had had any issues with the show’s gay content, Smith clearly had very specific issues. Moreover, Sherman also questioned Stamm’s claim that the show had never been fully approved by the school. He produced a copy of the licensing agreement between the school and the licenser, complete with a check signed by Smith and a contract designating that the money was for the school musical.

“Would Burch submit a check request for a musical that hadn’t been approved for Smith’s signature?” Sherman asked.

Whether Smith was backtracking or merely clueless about what show Burch had approved when he signed off on it, his comments to Burch clearly show that he was afraid the presence of gay characters in the musical might be too much for his small town to handle. And while the emails Sherman shared didn’t contain an explicit statement that gay people didn’t exist in South Wiliamsport, it’s worth noting that portions of the emails Sherman received were redacted, along with six full emails in the exchanges between Smith, Burch, and Stamm.

Judging by the “packed” school board meeting earlier this month where Sherman’s right-to-know request was briefly discussed, the issue is one the community cares strongly about.

Ironically, Stamm’s denial that the decision had anything to do with homophobia came while he was attending a community meeting with leaders of South Williamsport’s gay leaders and concerned families to discuss the issue.

Photos via yopriceville and mounties.k12.pa.us; Remix by Aja Romano