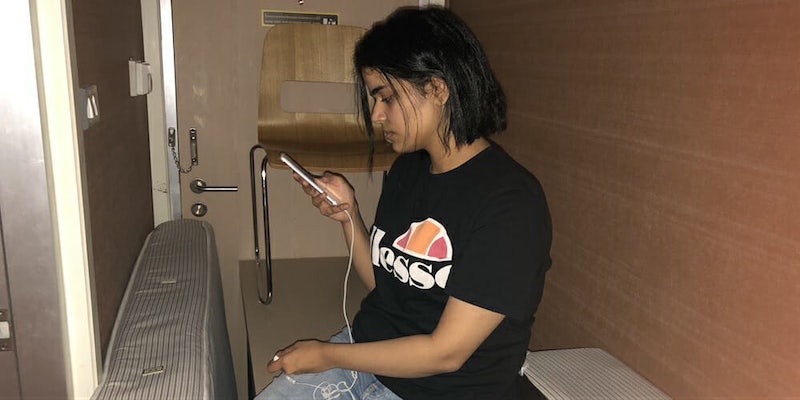 She says if she is released back to her family they will kill her.

An 18-year-old turned to Twitter for help on Sunday when she was told she was going to be deported back to Saudi Arabia, where she believes her family would kill her.

According to the teen, Rahaf al-Qunun, when she arrived in Bangkok on Saturday, she was met by a Saudi diplomat who seized her passport. On Sunday, she was told that she didn’t have the documentation for a Thai visa and would be deported. There was a problem with those orders, however: al-Qunun didn’t want a Thai visa. She already had an Australian visa, and she had only stopped in Thailand for a layover on her way to seek asylum.

Phil Robertson, deputy Asia director for Human Rights Watch, told BBC that it appeared that the Thai government was working with Saudi Arabia by manufacturing a visa application that didn’t exist in order to deport her. “She had an onward ticket to go to Australia,” Robertson said. “She didn’t want to enter Thailand in the first place.”

Desperate, al-Qunun took to Twitter to explain what was happening and ask for help.

The authorities told her she would be deported back to Saudi Arabia, on a flight to Kuwait. Al-Qunun took a final stand, barricading herself in her hotel room while she continued to send out pleas for help. She later told the BBC that she had renounced Islam and was afraid of being tortured and killed by her family as a result. Even if her family wasn’t a threat, she said she could still be arrested if returned to Saudi Arabia for the crime of apostasy for renouncing Isalm.

Twitter heard her and rallied. People began reaching out to officials demanding asylum for al-Qunun. They organized using the hashtag #saverahaf and shared a script for calling embassies on her behalf.

Please note under #Saudi law a father can kill his daughter & walk away scot-free. Honor killings are common and the #Saudi government is complicit to crimes against women. So the level of urgency is dire. We must do everything we can to prevent that from happening.#SaveRahaf https://t.co/PsISGUc0OX

After hours of barricading herself in the tiny hotel room, authorities finally allowed the UN High Commision on Refugees access to al-Qunun.

Hey I'm Rahaf. My father just arrived as I heard witch worried and scared me a lot and I want to go to another country that I seek asylum in
But at least I feel save now under UNHCR protection with the agreement of Thailand authorities. And I finally got my passport back🙏🏻❤️ pic.twitter.com/pQER7HDVi7

On Monday, Thailand’s chief of immigration police, Surachate Hakparn, said that the UN would be assessing al-Qunun’s case and that they would “protect her as best we can.”

“She is now under the sovereignty of Thailand, no-one and no embassy can force her to go anywhere,” he said. “Since she escaped trouble to seek our help… we will not send anyone to their death.”