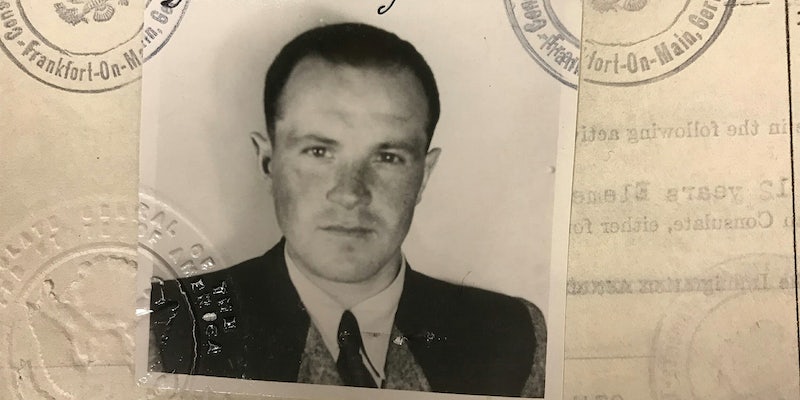 Twitter is writing all sorts of jokes in response.

Today on Twitter, Press Secretary Sarah Sanders praised Immigrations and Customs Enforcement (ICE), the government agency facing the brunt of criticism for its behavior under President Donald Trump. That’s because on Monday the agency deported one of the last living Nazis in America.

For many years a Nazi forced labor camp guard had been living in NY – a terrible injustice. Past Administrations failed to deport him. Today, @realDonaldTrump got the job done! ICE has removed this despicable Nazi from our great country. https://t.co/yBaboYK5N5

ICE deported Jakiw Palij this morning, returning him to Germany. Palij has been accused of working at the concentration camp at Treblinka during the Holocaust. Palij has defended himself as an 18-year-old who was conscripted against his will.

President Trump commends his Administration’s comprehensive actions, especially ICE’s actions, in removing this war criminal from United States. Despite a court ordering his deportation in 2004, past administrations were unsuccessful in removing Palij. To protect the promise of freedom for Holocaust survivors and their families, President Trump prioritized the removal of Palij. Through extensive negotiations, President Trump and his team secured Palij’s deportation to Germany and advanced the United States’ collaborative efforts with a key European ally.

We can all agree that’s good, as Nazis are bad and they should face justice for their crimes against society and humanity.

There’s just a tidbit of irony here, as ICE’s indiscriminate rounding up of people of color in America has been compared frequently to the behavior of Nazi Germany. And many of Trump’s most ardent far-right supports have indulged in white supremacy propaganda. There have also been charges of anti-Semitism within the administration, especially after Trump’s comments following last year’s neo-Nazi rally in Charlottesville, Virginia.

While the comparisons are somewhat hyperbolic and have resulted in a person working for ICE being falsely accused of being a white supremacist, Twitter was tossed up a softball here, so of course, users ran with it.

BREAKING: Not content with taking leadership of the American white nationalist movement after Charlottesville, Trump orders ICE to make him the top actual Nazi in America. https://t.co/zMlSdY55mD

You’d think Sanders would see the irony of this one before tweeting it out, but no! https://t.co/8R0Vyccnyu

Trump on last year's neo-Nazi rally in Charlottesville (which left one woman dead): “Some very fine people on both sides." https://t.co/5Ui77r3py9 https://t.co/A1nrAPIQgB

That said, people were proud of ICE’s actions for returning an accused war criminal to stand trial.

Given that Palij has been living in the U.S. since 1957, and that cameras just so happened to follow this arrest made by an embattled agency 19 months into Trump’s presidency, people couldn’t help but wonder if it was a bit of a PR stunt.

Or perhaps he deported a Nazi just to own the libs.

Under the Obama and Bush administrations, a number of Nazis living in the U.S. were found to have not been deported, despite being stripped of their citizenship and ordered out by the government. According to the report, the administration chose not to deport them because of health concerns, and questions of jurisdiction surrounding their crimes. Of the four on the list in 2013, three passed away and only Palij remained.