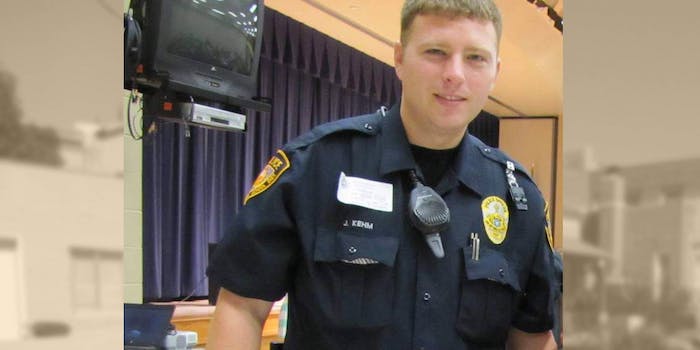 The officer is on paid leave pending an investigation.

A San Antonio police officer shown body-slamming a middle school student in a viral Internet video has been placed on paid leave while the school district he works for conducts an investigation.

The 33-second cellphone video depicts a physical altercation between a male uniformed police officer and a female student, later identified by her mother as Janissa Valdez, a 12-year-old sixth grader at Rhodes Middle School. At the top of the video, the officer is shown restraining the student from behind. A second later, the officer lifts the young girl from the ground and swings her around the right side of his body. Her body appears to slam forcefully onto a brick sidewalk.

Students near the officer can be heard shouting in the video and asking if she’s okay. After placing handcuffs on the student, the officer lifts her off the ground; she appears to be conscious, though stunned. One of the other students says, “Janissa, I told you not to.”

Valdez and another student had planned to meet because one had said something bad about the other, according to local ABC News affiliate KSAT.

“I was walking toward her, telling her, ‘Let’s go somewhere else,’ because there was a lot of people,” Valdez told KSAT. “Then that’s when other people came over and the officer thought we were going to fight, so that’s whenever he came and did that.”

The police officer in the video has been identified as Joshua Kehm, an employee of the San Antonio Independent School District (SAISD), which has its own police department. Kehm has been placed on paid leave.

A spokesperson for the San Antonio Police Department said it was not handling the case, because Officer Kehm is employed by a separate law enforcement agency.

A secretary at the SAISD Police Department confirmed its officers receive the same training as the city’s police.

A police sergeant for the school district declined to comment on the incident citing an ongoing investigation. The police sergeant stated, however, that, “generally speaking,” force or restraint may be applied in a situation if the officer believes the safety of another student is imperil.

In a statement emailed to the Daily Dot, a spokesperson for the San Antonio Independent School District said it must complete its investigation before any potential disciplinary action may be taken against an officer.

“The District launched an investigation yesterday into the incident shown on the video that occurred at Rhodes Middle School. It’s important that the investigation be done appropriately and in a timely manner,” the SAISD statement reads. “Texas state law requires an investigation to be conducted following a complaint filed against an officer, before that officer can be subject to any disciplinary action. The officer was placed on leave Wednesday morning, pending the outcome of the investigation. We are working to interview as many witnesses as possible, to ensure we take the appropriate action.”

In a photograph recovered from Facebook, Kehm is shown wearing an U.S. Air Force dress uniform bearing the rank of Senior Airman. (In another photo, presumably taken at a later date, he appears to have been promoted to the rank of Staff Sergeant.) His service ribbons indicate that he served overseas in at least one Iraq War campaign.

Prior to his discharged in 2014, Kehm served in the Air Force for seven years as a law enforcement officer and later as a non-lethal weapons instructor and security forces trainer, according to a recently deleted LinkedIn page.