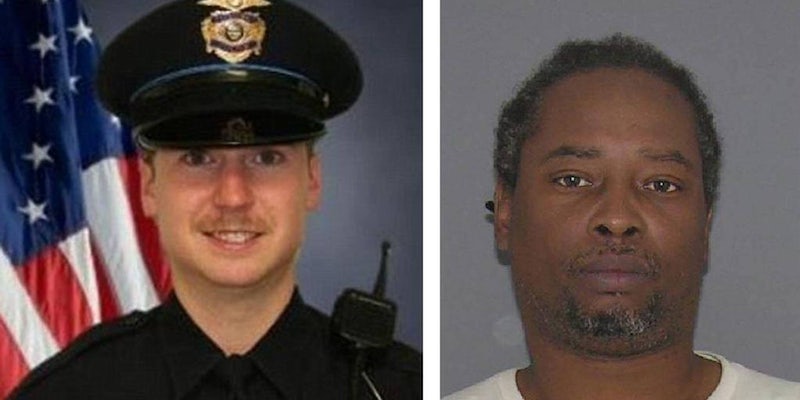 Why does the cop who shot him in the head look like a hero here?

Can you tell why Twitter is furious with this NBC News tweet about the murder of Samuel DuBose?

The network earned a wave of criticism for tweeting an outdated mugshot of DuBose alongside with a smiling photo of his killer, University of Cincinnati police officer Ray Tensing, who pled not guilty on murder charges Friday. The juxtaposition is startling to say the least.

Tensing pulled over 43-year-old DuBose on July 19 for driving without a front license plate. After a short scuffle, during which DuBose remained behind the wheel, Tensing shot him in the head, killing him instantly. Body-cam footage captured the entire incident, and Tensing was quickly indicted for murder.

The laziness of mainstream American media exemplified by @NBCNews. pic.twitter.com/YBU8AEPcWI

Hey @NBCNews, I went ahead and fixed this one for you. Do better. #SamDubose pic.twitter.com/vGot1pVxqW

.@NBCNews the choice of photos on this is deplorable and should be apologized for.

The backlash to NBC’s presentation of alleged murderer and victim recalls the #iftheygunnedmedown hashtag, which trended last year after the shooting death of Michael Brown in Ferguson, Missouri. That hashtag saw people of color offer the media options for representing them if they were killed by law enforcement: flattering, pleasant photos contrasted with ones suggesting rough, criminal behavior.

Image choices in stories with strong racial dimensions extend to fluffier publications, too. Entertainment Weekly found itself apologizing for its choice of photos in a tweet about the dispute between Taylor Swift and Nicki Minaj. That tweet has since been deleted, but it was, of course, screenshotted for posterity.