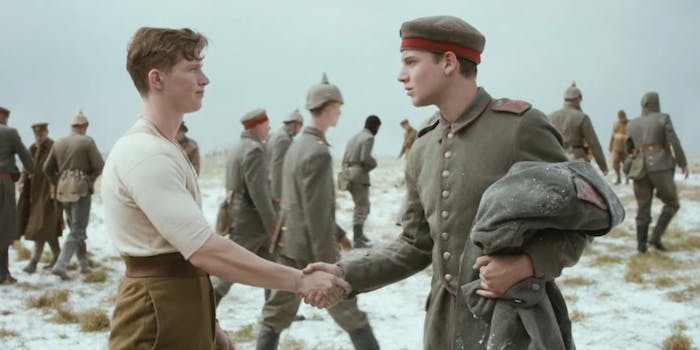 You don't usually get this kind of historical contemplation from a Christmas ad.

Some businesses’ Christmas commercials are more than just saccharine consumerist appeals designed to make you cry so you’ll buy. British grocery store chain Sainsbury’s is taking inspiration from history for its yearly ad.

Sainsbury’s teamed up with the Royal British Legion to recreate the famous Christmas Truce of 1914 between British and German soldiers. During the truce, the soldiers sang carols together, put down their weapons, and shared food, cigarettes, mementos from home, and even a friendly game of soccer in no-man’s land. The moment of peace was short, however, as they were eventually forced to go back to their trenches and continue the fight.

A century after the truce, and immediately after Armistice Day, this commercial reminds UK shoppers of the temporary peace that prevailed in the middle of the Great War.

It’s easy to forget that this is a commercial until one catches sight of the chocolate bar. Sainsbury’s says it plans to donate all of the profits from the bars (£0.50, or $0.79 per bar) to the Royal British Legion.

“The Christmas truce is an emotive and cherished story in our history that is especially poignant in this first world war centenary year,” Sainsbury’s head of brand communications Mark Given told the Guardian. “That’s why we have worked together closely with the Legion to ensure we bring this moment to life with authenticity and respect.”