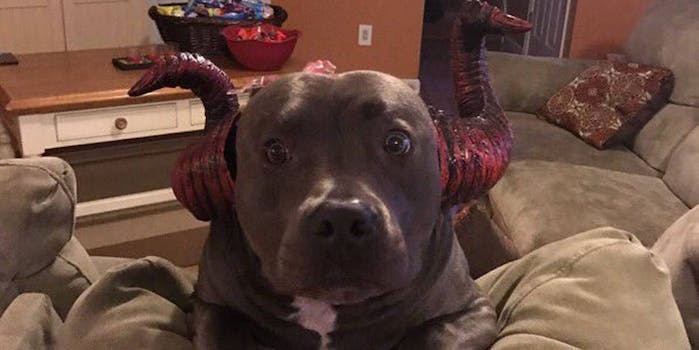 When no little kids would pet this pit bull, he actually started crying

Dublin the pitty needs love too.

All you need is love—even if you’re a dog.

Yesterday, William, who’s away at college, tweeted that his poor pit bull, Dublin, wasn’t getting any love from the trick-or-treaters at his mom’s place.

My dogs been greeting trick or treaters all night and they are scared to pet him and he's so sad pic.twitter.com/Oo7nsfC6uw

look how happy he was before hand FUCK those kids pic.twitter.com/gmU6lmsBGC

HE WAS CRYING IM SO SAD FUCK pic.twitter.com/AwMo0fMLYC

“The kids weren’t petting my dog because they were scared,” William told BuzzFeed in an interview. “She said he kept crying and that instantly made me so sad.”

Not only did it make his owner sad, but thousands of people on Twitter instantly sympathized, posting crying reaction GIFs and depressed selfies in response and retweeting the original over 47,000 times. Many even shared stories about their own pitties enduring similarly cold receptions.

This isn’t the internet’s first collective love sesh: Just this spring, thousands rallied for a cookout with “Sad Papaw,” whose sparsely attended burger barbecue photo went viral. A few months later, no one went to a grandma’s art reception at the local library, so her granddaughter made sure she saw the hundreds of tweets of encouragement that poured in for her online.

Fortunately, William’s aunt had the perfect solution to Dublin’s terrible, horrible, no good, very bad Halloween: She made getting candy contingent on petting Dublin. That seemed to brighten his night:

It’s the “happily ever after” every dog deserves.