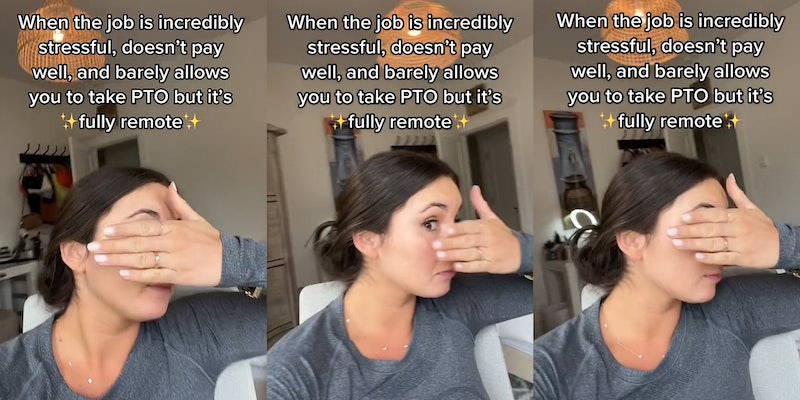 ‘When the job is incredibly stressful, doesn’t pay well, and barely allows you to take PTO but it’s fully remote’: Worker’s video about sacrifices she makes for a remote job sparks debate

'When it’s remote, almost every day can feel like PTO.'

A corporate worker went viral on TikTok after sharing what she sacrifices in a job in order to work remotely.

User Natalie (@corporatenatalie) typically posts corporate job life content. She shared with her 432,000 followers what she relinquished in order to snag a remote job.

“When the job is incredibly stressful, doesn’t pay well, and barely allows you to take PTO but it’s fully remote,” the text overlay reads, as Natalie records herself covering her eyes but slyly looking toward the camera.

The video has been viewed over 780,000 times since it was posted Aug. 29, sparking a debate in the comments. Most viewers resonated with the video, agreeing that a remote job is worth losing other benefits.

“So true, I will take remote at home any day , just suffer through but at least I am at home,” one user agreed.

“My job right now. Hate my life every day but I would rather hate my life from my bedroom than in an office,” a second admitted.

“Fully remote is a benefit in itself!” a third said.

Even Natalie confessed in the comments she would rather be unhappy at home than at work. “I’m miserable? Well at least I’m miserable at home,” she wrote.

Other viewers disagreed with Natalie, believing a remote job isn’t worth the misery.

“I had to quit because it was not worth it in the long run lmao,” one person commented.

“Not worth it at all. Thought it was until I found a job I actually enjoy,” a second concurred.

“Actually was in SUCH a funk remote feeling lazy at home- just switched jobs to in office and it has been so good for my mental to get out !” a third wrote.

Remote work exploded in popularity during the pandemic, and many workers still prefer working from home to returning to the office. According to Forbes, 74% of people reported that working from home has improved their mental health, while 84% said they would be happy to continue remote work.

The Daily Dot reached out to Natalie via email and TikTok comment.