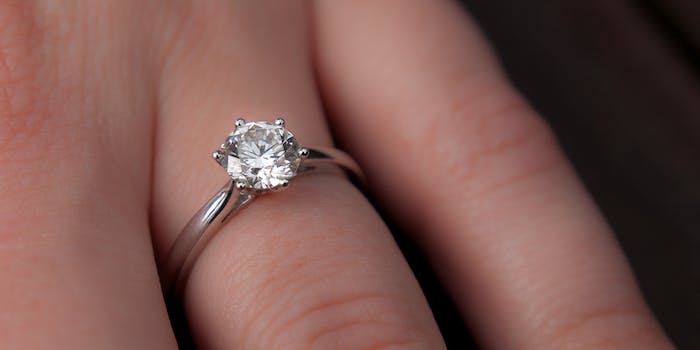 Is it a legit marriage proposal, or a marketing stunt?

If there’s anything we’ve learned in the Internet age, it’s that a marriage proposal doesn’t count unless there are millions of people watching it online. A couple at South by Southwest in Austin took that message to heart last weekend, when a woman proposed to her girlfriend during a screening of Ryan Gosling’s directorial debut, Lost River.

During the Q&A portion of the screening for the film—which tells the story of a single mom (played by Christina Hendricks) raising her child in a post-apocalyptic wasteland—a woman got up to use the mic. But instead of asking Gosling about his directorial influences, the woman popped the question to her girlfriend of 11 years.

“She finally moved here to be with me a few months ago after two years of being apart, and I wanna spend the rest of my life with you,” the woman said, to squeals of joy and applause from the audience.

The more jaded among us will assume that this was a marketing stunt. But according to Fast Company, the woman in the video is likely Austin native Heather MacKay, who has retweeted many articles and mentions of the proposal. MacKay only has 24 followers, and it seems unlikely that the Lost River marketing team would organize such a stunt around someone who is, at least according to social media metrics, a nobody.

With that investigation out of the way, a measured congratulations to the happy couple! We hope you have a beautiful life together. But if you have kids in the near future, Ryan Gosling might appreciate it if you broke the news somewhere other than one of his screenings.